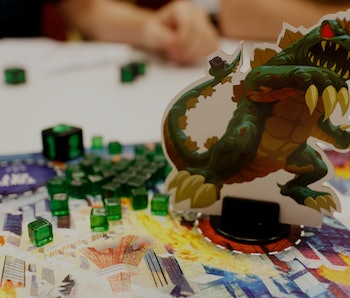 This holiday season, give the gift that tears families apart, the gift of a truly engaging board game. Fortunately for fans of tabletop gaming, there is a bumper crop of great new offerings. That may, however, make casual shopping that much harder. Here’s our guide to getting it right.

If you’re buying a gift for someone who likes activities involving communication and camaraderie — most humans fit that bill — try Codenames. This game is a darling of the Inverse office for a reason. To play, you divide the crowd in half (it works best between four and ten players, though theoretically there’s no upper bound). Each side gets a spymaster, who will guide your team toward specific words out of a pool of 25. If they choose incorrectly, the other team might get ahead. Or you could lose outright, because Codenames knows that living on the edge is party game gold. The twist, because of course there’s one, is that the spymaster is allowed to utter only one single-word clue (plus the number of words the clue applies to) at a time.

Codenames is a pendulum that swings between frustration and satisfaction, though the frustration regularly gives way to mirth. The game doesn’t encourage a poker face so much as a hand clamped over the mouth, the best way to suppress exclamations of encouragement or utter disappointment. It might be tough to find — Codenames has been flying off real and virtual shelves the entire fall thanks to demand outstripping print runs. (Be warned: There’s a chance it’s selling for more than the $20 suggested retail price.)

For the young of mind or heart, you could do far worse than picking up King of Tokyo. King of Tokyo, designed by Magic: The Gathering’s game guru Richard Garfield (we’ll get to Magic in a second), was released in 2011 to monster-sized acclaim. It’s sort of like Yahtzee, if instead of aiming for a full house you’re attempting to send large numbers of damage-dealing dice smashes in your opponent’s direction. It’s quick to learn, and best played with three or more people. That way, alliances can form — and then snap like skyscrapers under the weight of a giant lizard.

The 2014 sequel King of New York relocates the game to the U.S. East Coast and peels on a few layers of complexity, such as infantry units that attack rampaging kaiju. For arguably a touch more complexity than that, while keeping the similarly light-hearted theme, Galaxy Trucker mixes tile-grabbing dexterity with an old-school roguelike trip through asteroid-filled solar systems.

Consider Quantum for the person who maybe likes Star Wars or StarCraft (or really anything with Star in the title), and could possibly get into modern board games with the right introduction. The command, move, and conquer-style gameplay is a case study in elegance (it’s no coincidence its creator, Eric Zimmerman, teaches game design at New York University). A die represents one of your ships, and the face-up pip simultaneously dictates its speed, attack prowess, and how helpful it is at claiming a planet; the six, for instance, is quick but easily dead. Pick up the Revised Edition, released in July, for an even zippier bout of galactic conflict that’s bound to stoke a friend’s ludo-curiosity.

If, on the other hand, the giftee loves Star Wars and isn’t afraid of rolling dice, the X-Wing Miniatures Core Set scratches both itches with gusto. A The Force Awakens version came out this year, updating the popular 2012 wargame with tiny replica New Order TIE fighters and Poe Dameron’s X-wing. Like most wargames, X-Wing doesn’t have a board; instead, it comes with cardboard rulers that guide movement and firing ranges. Once you get over the small learning hump, and you watch a TIE fighter screams past your X-Wing with a dastardly u-turn maneuver, it feels as though the manufacturer poured not just plastic but a bit of Star Wars magic into the starship molds, too.

Should you want to get a buddy hooked on Magic, check out the Elspeth vs. Kiora Duel Deck. Magic: The Gathering is more popular than ever, but wading through the sheer number of Magic cards, packs, and expansions can be intimidating. Magic’s Duel Decks offer a solid, though not flawless, introduction; everything you’d need to get two players gathering is right there in the box, but your mileage will vary with the patience of learning the game. Pitting Elspeth against Kiora results in a little more balanced, and less finicky, experience than the other recently-released deck pairs. Just be aware that Magic, if you get really into it, can be a money suck. But it’s a fantastic game — it wouldn’t have survived two decades if it weren’t — and the great thing about having friends who are Magic fiends is, like narcotics addicts, you’ll know what to buy them next year!

If Magic isn’t quite your style, but a two-player battle of wits is, look toward Hive: Carbon or Star Realms. Hive is most easily compared with chess, in that it’s a strategy game revolving around piece movement. Unlike chess, there’s no board. Instead, hexagonal bugs crawl over each other trying to encircle a queen bee. Hive is breezier than chess — but just like in the game of kings, a bad move, not bad luck, loses the game. In Star Realms, there’s a fair bit of random chance, as you build a deck out of cards that are presented to you over the course of the game. It’s more self-contained than Magic, though it doesn’t take much to divine Magic’s ancestry — a pair of pro Magic players designed Star Realms — in the game’s cardboard bones.