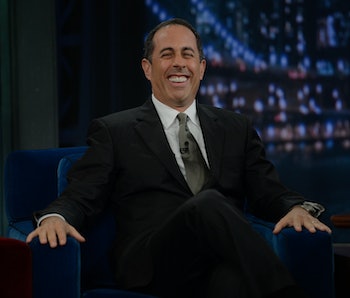 You may have heard that Jerry Seinfeld — star of a famous 1990s sitcom named for him and the Crackle original smash Comedians in Cars Getting Coffee — has just announced a triumphant return to standup with a residency at Manhattan’s Beacon Theater. It is set to last at least six shows, though he’d happily continue provided sales and stamina do not wear thin.

The fine print you might have avoided is that he was inspired toward this action by his friend Billy Joel, who in 2014 began a monthly series of concerts at Madison Square Garden that is still running (buy tickets here).

“When Billy Joel does ‘New York State of Mind’ at the Garden, it’s different,” Seinfeld said in a New York Times interview today. “It sounds different. It feels different than when he does it in Charlotte. So, I thought this is a really unique moment to see a guy who’d come from this area and built his career.” God, to be a fly on the wall of Jerry Seinfeld’s mind during a Joel gig at MSG.

When Joel announced his ploy, it was hard to imagine it would work out for very long, not only because Joel is getting on in years and hasn’t put out an album that isn’t a book of classical piano etudes in 22 years, but because MSG seats over 18,000 people. He proceeded to sell out 12 shows in a row, and even coming up, his shows through April are almost booked.

Jerry’s new home of the Beacon Theater — where he will debut on January 7th — seats six times fewer people, which seems about the right size for him. But it seems unlikely he can last like Joel, who is showing no signs of stopping with a good year-and-a-half of shows soon to be under his belt. Seinfeld might, though, last like the neverendingly dope Steely Dan, who does a biannual series of shows at the Beacon, beginning every gig by running through the entirety of a different one of their iconic albums, or doing some other special event.

On the other hand, how much is the Seinfeld act going to change from month to month, really? Steely Dan offers a different attraction every night, with a backlog of nine top 20-charting albums as well as plenty of Donald Fagen solo material to rock with when necessary. How much can you imagine Jerry Seinfled spicing things up month-to-month? “What’s the deal with this dabbing thing, huh?”

Billy Joel has over 30 Top 40 singles, 22 albums and is Long Island’s official mascot. Jerry Seinfeld starred for nine years in a television show that bore his name and changed the face of comedy on television, but he was definitely the worst part of it — especially, his stand-up segments. Much of the rest of his filmography is cameos billed to “Himself” on imdB. In the standup world, he’s definitely more every comic’s buddy than a groundbreaking legend. Or maybe they secretly hate him — have you watched some of those Comedians in Cars episodes?

Yeah, you may have bought a mansion from him, Jerry, but you’re not only not a Joel, I’m not even sure you’re a Dan when it comes to draw. I give Seinfeld at the Beacon a year, at best, and that’s being generous with the “middle-aged bridge-and-tunnel couple seeking to recover from botched second marriages eHarmony date” demographic.

More like this
Entertainment
8 hours ago
Last of Us Episode 3 release date, time, and trailer for HBO's zombie show
By Claire Fox
Entertainment
6 hours ago
Where and how to watch the 2023 Oscar nominees
By Mónica Marie Zorrilla
Entertainment
Jan. 27, 2023
The Last of Us Season 2 renewal: Everything we know so far
By Eric Francisco
LEARN SOMETHING NEW EVERY DAY.
Share: