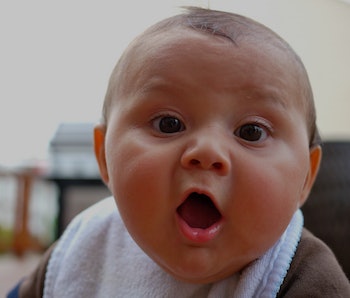 Because being twee is the only thing the millennial loves as much as technology, we must now acknowledge the rise of the whimsical Instagram filter name.

That is, according to BabyCenter, which argues that the following names rose in popularity in 2015 thanks to the photo-sharing app: Lux, Ludwig, Juno, Valencia, Amaro, Reyes, Willow, Hudson, and Kelvin.

To be fair, some of these work, but in the sense that they meet the criteria of something you could bring yourself to call another human being.

BabyCenter says that because the majority of moms use Instagram to document their children, 30 percent with the gusto of eggplant-obsessed rappers or at least daily, it’s therefore app causality. We’re a little more cautious — perhaps there’s been, say, a huge surge in moms playing “Beethoven for the Womb” because they think (thanks to some anonymously-written Elite Daily dribble) little Ludwig is now going to be a math whiz. Or not.

The names do come from a survey with a large sample size — 340,000 names — but is also self-selecting, because only the type of person who registers a newborn with a Johnson & Johnson-owned advice website is included. This also might explain the rise of the Fault in Our Stars names, while Khaleesi, Kingslayer, and Drizzt Do’Urden go unmentioned.

To hear BabyCenter tell it, Instagram isn’t the only software to inspire names. Thanks to video games, expect a larger crop of Zeldas, Yunas (Final Fantasy), Rayne (BloodRayne), Kitanas (Mortal Kombat), and Meryls (Metal Gear Solid) on the playground in a few years’ time.

But the claims it’s the first time that technology has broken through into baby names is doing a disservice to the glorious reign of Axels, who, though they may have fallen from their former glory, are merely perfecting those gnarly cock-rock guitar solos which will allow them to reclaim neonatal nomenclature once again.