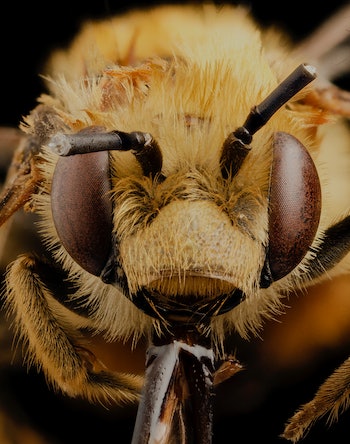 For a few years, the U.S. Geological Survey Bee Inventory and Monitoring Lab has been quietly posting gorgeous photographs of bees (as well as other insects and creatures) on their Flickr page. Unlike plenty of other Flickr profiles that boast subpar photos under Creative Commons usage, the USGS Bee Inventory has been posting remarkable macro photos on its profile every few days for quite some time. In fact, the USGS Bee Inventory just released a mesmerizing book this summer featuring photos of bees like you’ve probably never seen them before.

Inverse talked to Sam Droege, head of the bee inventory and monitoring program at the USGS Bee Inventory about what drew him to the bees, whether or not these buzzy insects are actually going to die out, and just how these breathtaking photos come to life.

These bee photos are absolutely gorgeous. We can’t stop looking at them…

I have lots of fun making them, which is important, because I have to make a lot of them.

How many of these photos will you make?

Eventually — whatever “eventually” means — we will have a photograph for every species in North America. That’s going to take a long time. The males and the females are very different looking, so that means we’ll have to do a lot.

On the website, we have about 2,500 photographs, and a lot of them aren’t necessarily bees. We get intrigued by something else, and we’ll take pictures of wasps and moths and other types of bugs.

How do you collect the specimens of various types of bees? It seems like bees with pollen on them could be pretty difficult to obtain.

A variety of ways. We have this thing called the handy bee manual, and it’s full of all kinds of techniques.

The short answer is that those specimens come from a variety of places. Some we and other people have collected in standardized surveys. We actually have several YouTube videos and SlideShare things on how to clean bee specimens that have been in water, because we usually trap them in soapy water.

If you just take them out of the water and put a pin in them — which is sort of the standard etymological way of storing a specimen for future studies — they look terrible! They’re all bedraggled and have bad bee hair. We have all these techniques which amounts to a “beauty salon” for bees where the bees are washed and dried. Then they’re pinned.

As part of our more broad work, we are parsing thousands and thousands of bees every year — so a very, very tiny number of those are selected to be photographed.

We also do the old fashioned thing where we go out with an insect net and catch them. If we want the thing with pollen on it, we will have a jar that has cyanide in it, which is one of the common chemicals used to kill insects for insect jars. It’s harder to get that [cyanide] these days than in the old days, I’ll tell ya. [Laughs]

You’ve got some videos online detailing just how you make these macro images by taking a bunch of photos and turning them into a kind of composite image. Is that how you do all of these?

That technique is generically called “stacking.” In a way, it’s a little similar to what people call “stitching.”

You can use very high magnification lenses on cameras to get close to the subjects. Our standard lenses are 1-5x — so one to five times the size of the insect. We have 10x lenses that we’ve put together from microscope parts, but the problem is that the resulting picture has a very, very tiny amount of that picture in focus.

The depth of field is minute when you get up to 10x, so it’s like 1/50 of a millimeter. It just doesn’t make a very good picture by itself.

But if you take a whole sequence of pictures at slightly different distances with the area of each of those pictures overlapping the adjacent pictures, then there’s software that will combine all those pictures together into one in focus shot of whatever you’re taking a picture of.

How long does it take to make one of these images?

It depends. If we’re re-washing and re-drying an insect specimen — which we do to get the best shot — the whole process from “Hey, I want to take a picture of this thing,” to “Here’s the uploaded picture on Flickr,” we’re talking over an hour’s work at least.

Besides these bee photos, how long have you been taking photographs?

I’ve been taking photographs since I was a kid.

But using this kind of stacking technique, I started doing that when the programs first came out. We did it by attaching an early digital camera — the Nikon CoolPix 990, which was way ahead of the pack at the time — to a microscope objective. We did everything by hand… It worked, but it was a tremendous amount of work.

I wasn’t that pleased with the resulting pictures mostly because they were being taken through a microscope rather than a camera. Now, we’re using a Canon 5D for most of those pictures.

How did you first get into working with the USGS Bee Inventory and Monitoring Lab?

My general job is to design and develop survey programs for plants and animals in North America. We’ve done that for lots of things — for birds, amphibians, butterflies, lichens — and the tricky thing is that it would be neat to have all the plants and animals be surveyed. The reality is that there’s not the money or time or interest to do that, so we have to choose which groups get surveyed.

A number of years ago now, we realized there was a lot of talk about the decline in native bee populations, so that was of concern because pollination is a key event in plants’ lives. If all of a sudden you lost a big chunk of the pollinators, then you could throw a lot of the ecosystems in North America into chaos. We thought that was grounds enough for us to look at what’s going on and see if we could design a survey program for bees. That was around 2000.

There are about 4,000 species in North America, and there wasn’t one field guide or key or identification material. Long story short, we got involved with doing that.

Part of creating identification guides is having high quality pictures available — just because you used an identification guide doesn’t mean you used it correctly. Traditionally, you’d have a museum that has all types of reference material of these bees available for you to compare your specimen to. But many of those museums are closed or the universities don’t support them anymore.

What we wanted to do with the pictures was create a virtual museum.

Speaking about the decline in bee populations, do you think there is a possibility that we might see the bees completely plummet in our lifetime? Or do you think there’s a way to rehab the environment in the near future for the sake of the bees?

That [decline] could happen with the honeybees. Honeybees are basically a commodity, and they’re not native to North America — they’re native to Asia.

If you want honey, you have honeybees. If you want pollination, honeybees are handy… but a lot of our native species do a lot of the pollination even in our agricultural crops. If you’re looking at honeybees, the situation is relatively bad. The main reason is that there are a whole series of diseases that have moved into the country and other kinds of vulnerabilities that aren’t there for native species of bees.

You can still get honeybees a plenty, they’re available — they’re just more and more expensive to maintain, and people are looking for alternatives.

We’re still in the process of creating a monitoring program for native bees, and it’ll be years before we can give you a definitive statistical answer to how our native bees are doing. But my impression is this: I would say that the world would have to really have gone to hell for us to have lost a big chunk of our native pollinators.

They’re very flexible, they’re very integrated with our environment, and if we’re in a situation where we’ve lost most of them — we’re in really, really deep trouble. Thankfully, my impression is that we haven’t lost a lot of them.

More to the point of being on a commercial or day to day basis, we tend to eliminate a lot of the flowering plants. We’re too neat and tidy! We need all that weedy, flowery beautiful stuff that occurs in unmanaged, unmown areas. The more we mow and the more we apply herbicides, the fewer bees we have. It’s as simple as that.

We do still have natural areas that have good bee populations, so I don’t really expect us to lose our native bees. I do expect that we’ll see fewer of them in fewer places just because of what we’re doing to the environment. We’re not doing it to the bees per se, we’re doing it to the plants the bees depend on.

Do you have a favorite bee photograph so far?

Frankly, one of the reasons that we’re doing the project is because I like doing it. We have so many things going on, and we have a lot of freedom to pursue the topic of monitoring in all kinds of ways we see fit. There’s no requirement that says we have to be creating pictures, but I really love creating them and working on them and having them around for my personal enjoyment.

Originally, there was nothing in my mind that said other people would enjoy looking at these pictures. I enjoyed it, and we created reference material for scientists… but the general public? You know, that wasn’t on the radar.

That’s been a very lovely bonus to developing these pictures — a load of people are looking at them and enjoying them… and they’re all free.

Every one of the pictures we take you can download and do absolutely whatever you want with them. You can print them out or put them on album covers. It’s great! You don’t need to ask permission.