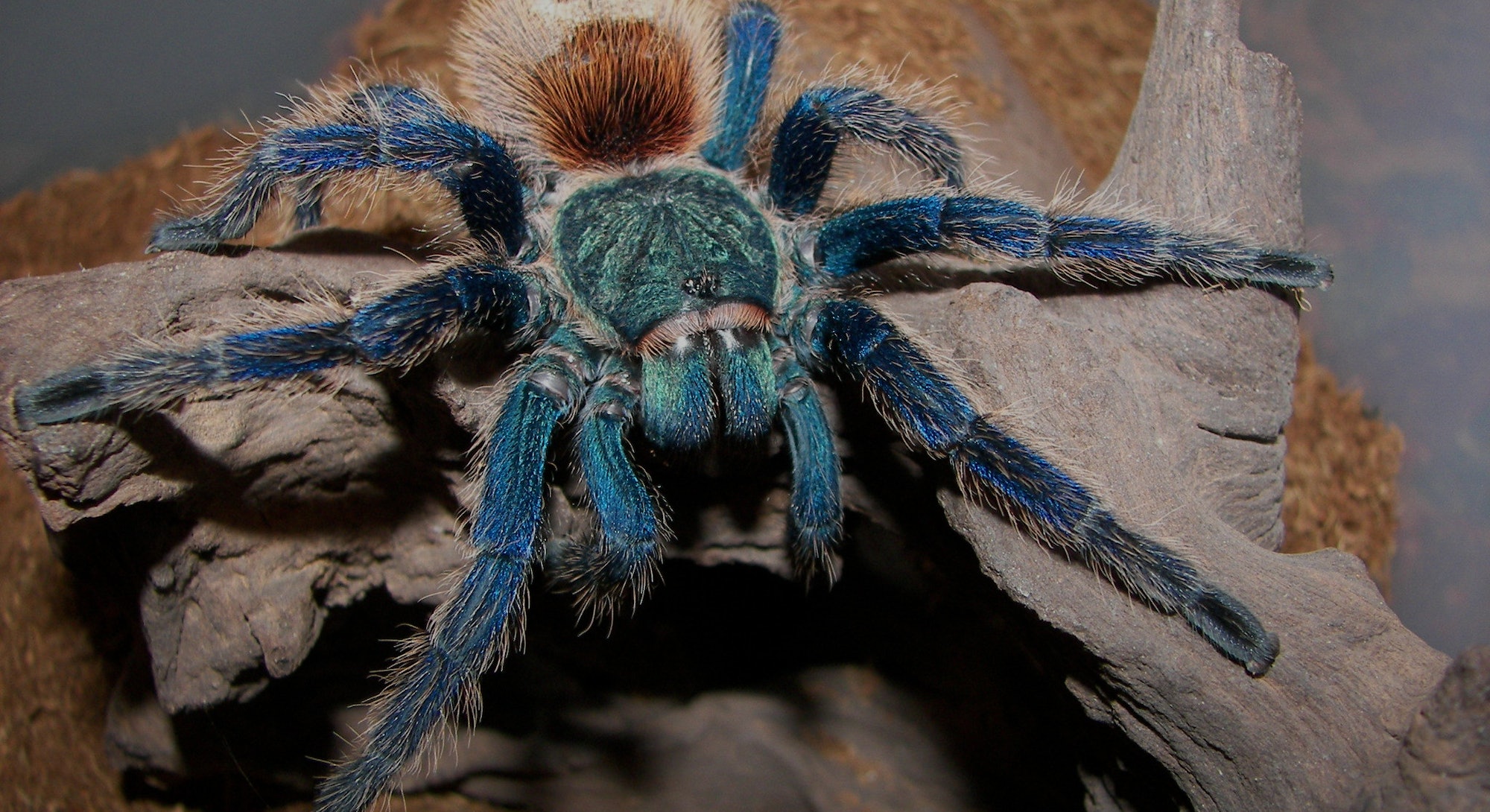 In plenty of animals, bright hues signify the means to various evolutionary ends. One of New Guinea’s many birds of paradise species uses a unique blue pattern to help attract females during mating dances. Meanwhile, the poison dart frog’s azure skin is a silent siren for amphibian-eating predators to stay away. But what about these punk rock, ultramarine-haired tarantulas?

Scientists just released a study in Science Advances that says… well, basically, they have no idea why these huge, hirsute arachnids are all the same shade of blue.

Over time, it turns out tarantulas have evolved to create the same blue hued-hair on eight separate occasions. That’s almost like taking a room full of monkeys on typewriters and having them come up with the same phrase eight times, like… “Roses are red, tarantulas are blue… but why?”

A team of researchers tried to find out why so many different tarantulas developed the same cobalt coloring independently of one another. They took 53 genera of tarantulas and surveyed the color schemes of their hair — turns out 40 of the genera showed some sort of blue coloration. To figure out how the blue hues evolved over these various genera, they “assumed that blue was the ancestral color for any genus with at least one blue species.” Researchers found that the same blue had evolved at least eight times.

However, it wasn’t pigment that caused the spiders to replicate the same blue… it was nanostructures in their actual hair that reflect blue light. Scientists used various types of microscopy to analyze each of these hairs, and found that there wasn’t any one way these arachnids had evolved with similar results.

Meanwhile, transmission electron microscopy found different types of nanostructures in the hairs that were made up of two materials with high and low electron densities — a chitin-protein composite and air, respectively.

Finally, light microscopy (or microspectrophotometry) showed that the color wavelengths found in these blues were all clumped around 450 nanometers, with only a 20-nanometer range. That means that they were all essentially the same color, especially when compared to the vibrant variation in blues the researchers also looked at in Polyommatus (common blue) butterflies.

These tarantulas are all somehow matching each other through plenty of different methods, but it’s still a huge mystery as to why they’re blue in the first place.

Is it for mating purposes, like the bird of paradise? Probably not. The researchers say that tarantulas have spectacularly poor vision (hence all those creepy eyes?) and no noticeable visual courtship involving color, so they think it’s unlikely the blue is some sort of mating signal. (However, there are other spiders with better eyesight that do rely on colors and mating rituals in order to get it on — case in point, the viral, dancing peacock spider.)

Instead, scientists say that tarantula blue is the “result of natural selection for some (to-be-identified) functions.”

One theory might lay in their habitat: the understory of tropical forests where yellow-green wavelengths dominate. (This might also explain why there aren’t many green-haired tarantulas — a part of the color spectrum that might make it easier for predators to spot them in the forest at night.) The blue might be a kind of compromise between being too conspicuous (green) and too inconspicuous; however, the answer as to what exactly the blue is signaling is still a mystery.

“Despite underlying morphological diversity, conserved reflectance in a specific narrow band of wavelengths suggests a signaling function, but the receiver of that signal for tarantulas remains unclear,” the researchers say.

While the case of the blue spiders has yet to be solved, this research does open up some cool possibilities for humans. The scientists say that the kinds of colors found in these tarantula hairs may “inspire solutions to eliminate undesirable iridescent effects of structural color—a key factor limiting the use of structural colors in many human applications.”

Researchers have determined that these tarantulas’ blue hues aren’t pigmented; they’re structural. They’ve also verified that these colors also don’t change when seen from different angles (unlike the iridescent colors of other butterflies and birds). That means scientists might be able to look at the structure of these arachnids’ hairs and revolutionize the way we create colors for electronics in the future.

So besides helping the world from an overload of insects, it looks like we might also be thanking spiders for protecting our eyes from harsh colors on our smartphones and TVs one day.