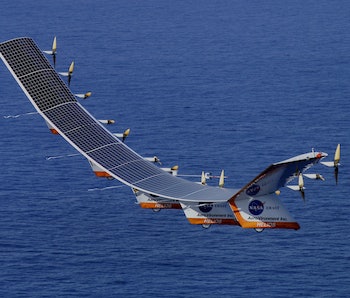 NASA is most famous for its exploit in the final frontier. Its greatest achievement (as measured in publicity) thus far is landing human beings on the moon. That feat will only be surpassed when mankind steps onto the Martian surface. Still, the administration has plenty going on here on Earth.

NASA’s projects include groundbreaking research and development in tons of other fields and disciplines. Here are four NASA initiatives that have little or nothing to do with space exploration.

One of NASA’s core mission goals is to gather as much data as it can to explore how the Earth’s climate has changed over the last millions of years, and how it is currently changing today in response to the deluge of greenhouse gases being emitted into the atmosphere. Part of that $18 billion NASA budget is allocated to building and launching satellite equipment to examine how Earth’s atmosphere is changing rapidly these days, and acquire data only observable from space — like overall ice melt, sea level rise, carbon emissions, and more.

Just a few weeks ago, NASA announced it was ramping up new technologies to help understand the other half of the carbon equation: how ocean and terrestrial plant life store carbon that isn’t hanging around in the air and helping to heat up the planet.

Most space travel and exploration actually uses robots and automated equipment to help achieve mission goals. How do you think they got the Curiosity rover on Mars to work so well?

But that doesn’t mean those robots have to be used in space. A lot of the technologies that NASA develops for these robo-astronauts are the same things that would make an autonomous machine excellent for reconnaissance tasks and search and rescue missions here on Earth. NASA’s Pioneer robot, for instance, was built in response to the Chernobyl disaster, and was designed to help clear rubble and acquire samples for analysis and testing.

Recently, NASA gave a pair of robotics research groups at MIT two humanoid Valkyrie robots, to play around with and improve for the ability of those machines to do tasks for humans. There is little chance those robots will actually be used in space one day — but it is quite likely these Valkyrie robots or successor models could be used to help assist in disaster relief operations here on Earth.

Believe it or not, a lot modern medical technology comes from equipment originally developed for space missions in orbit. Many clinical trials sponsored by NASA’s Innovative Partnerships Program have tested many different kinds of technologies for health and medical purposes, including transmitters for monitoring fetuses in the womb, LEDs that help guide surgeons during brain cancer operations, and digital imaging systems derived from the Hubble Space Telescope equipment for use in breast biopsies.

Clean and renewable energies are also an important part of NASA’s work. Researchers at the space agency are heavily invested in promoting biofuels and solar energy systems not just for spacecraft and satellites, but also for energy infrastructure here on the ground.

All of this work ranges from using algae and plant-derived cellulose to make fuels, to improve solar energy panels so that they work as efficiently as conventional systems, and also to increase the performance of wind energy infrastructure.