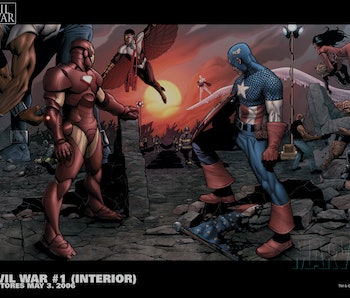 The core problem with the “Civil War” arc in Marvel comics is that it doesn’t make sense. Tony Stark, who opposes superhero registration initially, buys in slightly then turns fully fascist, helping to create a secret prison in another dimension. Captain America leads the resistance for no coherent reason other than that S.H.I.E.L.D. preemptively pisses him off. The Civil War event was supposed to bring tragedy to the Marvel universe, but it was so poorly conceived that it ended up feeling more ridiculous than traumatic.

A huge problem was that Marvel picked exactly the wrong writer for Civil War in Mark Millar. Now, Millar (writer of Kick-Ass, The Ultimates, and more) has his strengths — his nihilistic sense of humor often combines will with his violently propulsive storytelling in entertaining fashion. But when you have an ideological Civil War that requires both sides to have sympathetic, coherent political stances…you don’t hire Millar, whose idea of politics is throwing a bunch of stuff he hears on the news at the wall then making jokes about it. As such, picking out the actual themes of the “Civil War” text either leads to far-right paranoid fantasies or self-conscious acknowledgment of its own incoherence.

Captain America: Civil War has the opportunity to fix its characters core motivational issues by making it personal: Cap wants to help Bucky, but the government doesn’t. From this simple personal motivation, the entire ideological conflict sorts itself out — Cap’s individual freedom versus Stark’s urge toward stability.

It helps here that the Avengers films have largely focused on the personal conflicts of these two dominant men — albeit in a relatively friendly fashion so far. When they’ve interacted, there has always been tension. Conflict never felt inevitable, but it also didn’t feel unlikely.

The second major advantage the Civil War film has is that it’s a Captain America film. The comics suffered from trying to portray two clearly unequal points-of-view as separate-but-equal. “Whose side are you on?” demanded all of the marketing, while the actual text portrayed Iron Man and his allies more as totalitarian dictators who literally program a superpowered robot to murder a black hero.

By placing Cap and his subjective experience at the center of the movie — making him the protagonist, and Stark a sympathetic antagonist — Captain America: Civil War has the opportunity to tell the “Civil War” story as an actual, whole story, instead of an incoherent mess with great side stories. The potential is there. In six months we’ll find out if Marvel can finally achieve it.

More like this
Gaming
Feb. 1, 2023
Surprise Your Opponents With This Overwhelming Marvel Snap Mystique Deck
By Joseph Yaden
Gaming
Jan. 31, 2023
How to Duel Your Friends in the Marvel Snap Battle Mode
By Joseph Yaden
Entertainment
Feb. 4, 2023
Superman: Legacy Will Reinvent the Man of Steel — Everything to Know
By Eric Francisco
LEARN SOMETHING NEW EVERY DAY.
Share: