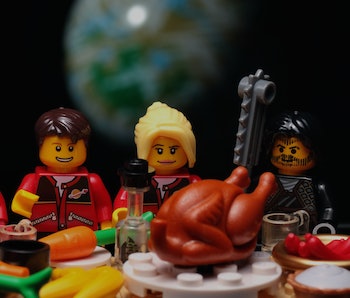 Almost every year, a small contingent of Americans 249 miles away fail to make the trip home for Thanksgiving. The American crew of the International Space Station traditionally has a pre-prepared and somewhat paltry feast at 17,000 miles per hour, but this year even that won’t happen. Scott Kelly is the only American on the ISS right now. Come Thanksgiving, he’ll be the loneliest American (as measured in distance at the extreme end of the orbit).

Leland Melvin had more company, but he can still sympathize.

Leland Melvin is a retired U.S. astronaut (and former NFL wide receiver) who flew on a pair of missions to the International Space Station. During his second stint in November 2009, Melvin and seven other American crew members had the pleasure of partaking in a unique Thanksgiving dining experience aboard the ISS. It was, Melvin says, memorable.

“The food selections for a Space Shuttle crew are planned ahead of time but the preparation is pretty minimal except for rehydration and heating if required,” Melvin tells Inverse.

Let’s get to the first question you probably have: Irradiated turkey? What?

“The turkey they have available for Thanksgiving has been made shelf-stable by irradiation, to kill bacteria and allow the food to be stored at room temperature,” says Vickie Kloeris, the food system manager for the ISS, based at NASA’s Johnson Space Center. “They just warm it up and eat out of a packet with a fork.”

All meats are irradiated before they’re sent up to the ISS because space food is tricky. Foods on the ISS need to be preserved and stored such that they survive the trip and don’t spoil too soon. Most solid foods are freeze-dried and all liquids besides water are kept as powders inside pouches. In both situations, you simply add water at mealtime, wait about 20 to 30 minutes, and then chow away.

“Crew members often put special items in their bonus containers with the holidays,” says Kloeris. “In the past, crew members have taken cranberry sauce, and frostings, and decorated cookies for the holidays.”

Prolonged weightlessness also seems to dull the tastebuds a bit, so astronauts usually prefer that they’re food is seasoned with more spices, or have close access to sauces like tabasco.

Then there is the meal itself: Eating is a very different activity when you don’t have gravity to help you out. Any bits of food or liquid that come loose could float around and cause serious damage to a piece of equipment worth billions of dollars. Astronauts need to exercise a bit of caution when they finally sit down (to use a phrase that makes no sense in this context).

“Whether it’s Pluto, Mars, the Moon, or wherever,” Melvin says, “I think as we explore as a civilization, we’ll take our take our traditions with us, and break bread in that same way.”

Check out the Great Big Story video below to learn more. You can also see the first part of the series, where Melvin discusses what it’s like to dream in outer space.

More like this
Science
5 hours ago
How the Webb Telescope could unveil the newborn universe
By CAROLYN COLLINS PETERSEN and Universe Today
Science
8.12.2022 10:00 AM
45 years ago, the first Space Shuttle made history without going to space
By Allie Hutchison
Science
8.7.2022 11:00 AM
Webb Telescope discovers an “amazing” galaxy from the edge of time
By LAURENCE TOGNETTI and Universe Today
Related Tags
Share: