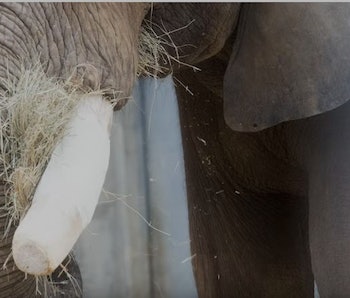 Tusks are an elephant’s multi-tool, a Swiss-army incisor for fighting off other elephants, scrounging in the dirt, and carving the bark off trees. So when a 35-year-old elephant named Bulwagi busted his tusk at the Birmingham Zoo, his handlers knew they’d have to fix it. In the past, when elephants have cracked their tusks, steel bands encircle the fissure to keep the tooth together, which is what the zoo asked Brian Pillay, a University of Alabama at Birmingham engineer to do.

But Pillay thought he could do Bulwagi one better: a carbon fiber bandage, made of the same stuff found in the aerospace industry. Stronger and lighter than steel — about a fifth of the weight of a metal ring — the carbon fiber will keep the tusk intact and also prevent infection at the site of injury.

“We put a number of layers of carbon fiber and fiberglass around the tusk, and then used a vacuum pump to suck the resin, kind of like an epoxy, up into that product, and it set and became a really hard structure that is going to resist the forces that resulted in the crack. No one has done this before, so it’s our hope that this will be a process that will stand the test of time.”

The zoo isn’t sure if this is a permanent fix, as Bulwagi might end up losing the tusk. But if the proof-of-concept procedure works, carbon fiber wraps could help pachyderm cracks down the line.

New medical materials overwhelmingly focus on human healthcare — that’s where the money is — but as design and techniques become cheaper, expect animals to benefit, too — like disabled dogs who run thanks to 3D-printed legs; or dolphins with prosthetic fins.

More like this
Science
Oct. 2, 2022
Climate change could make one household pest increase its path of destruction
By Lucas Cernusak, Amy Zanne, Alexander Cheesman and The Conversation
Science
Sep. 28, 2022
In a first, scientists show that dogs can smell when humans are stressed
By Elana Spivack
Science
Sep. 25, 2022
Why do cats love cardboard boxes? Pet experts decode the obsession
By Tara Yarlagadda
Related Tags
Share: