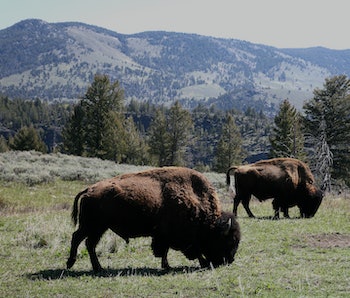 Does the systematic slaughter of thousands of bison seem a little too, well, 19th century to you? You’re not alone.

This winter, Yellowstone National Park has proposed killing 1,000 of the beasts, also known as buffalo, in an effort to control their migration outside of park boundaries and into Montana. As usual, the yearly slaughter is controversial.

Government officials and tribal leaders are meeting today at Chico Hot Springs to discuss the plan. The counter-proposal of the Confederated Salish Kootenai Tribes is that between 800 and 900 animals should be killed.

The annual winter killing arose out of an agreement signed in 2000 between Yellowstone and Montana, after the state sued the park for allowing bison to roam onto state lands.

Wild bison pose a risk to cattle because they can transmit diseases like brucellosis. Cattle, in a way, also pose a threat to bison, since interbreeding could threaten the genetic integrity.

When commercial hunting drove the American bison close to extinction in the late 1800s, their absence made room for cattle and grain farms. Today’s conservation ethic dictates that we make space for the animals, but it will always be a matter of compromise.

The National Park Service did not immediately respond to a request for comment on how it arrived at the figure of 1,000 animals, though according to its website, the Yellowstone bison population is regularly about a thousand animals larger than the target of 3,000.

Hunting is not permitted within the park. A few hundred animals will likely be hunted as they cross outside of Yellowstone’s boundary. The rest will be collected near the border for slaughter, with meat and hides distributed among local tribes.

More like this
Science
Jan. 21, 2023
Plague study complicates a commonly held belief about the Black Death
By Samuel Cohn, Philip Slavin and The Conversation
Science
Feb. 1, 2023
Look! Five New Snake Species Discovered in a Habitat Devastated by Mining
By Robin Bea
Science
Jan. 29, 2023
Are coyotes dangerous to dogs and cats? Here’s how to keep your pets safe
By Tara Yarlagadda
LEARN SOMETHING NEW EVERY DAY.
Related Tags
Share: