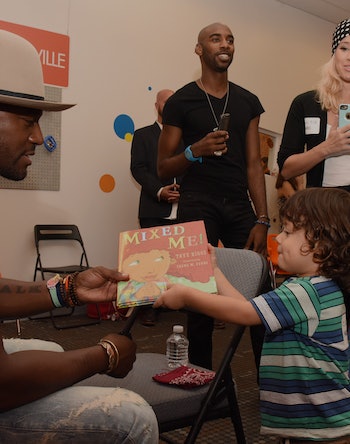 Actor, author, and occasional producer of super-awkward Vine videos Taye Diggs made some waves in a Grio.com interview promoting his second children’s book, Mixed Me. Diggs’ first book, entitled Chocolate Me, was meant to encourage black children to take pride in their self-image in part by reflecting on the struggles Diggs encountered as a child:

“The first book I wrote, Chocolate Me, was based on my experiences growing up a little chocolate boy in a predominately white neighborhood, and how I would get made fun of, and how through my mother and father and my own recognition, I was able to develop the power of self love.”

The follow-up book, written through the eyes of a fictional biracial child, explores similar issues like race, self-love, and identity. Nothing wrong with teaching children about that; in fact, we should be striving to have more of these conversations with our youngsters, not fewer. However, in the interview Diggs revealed that part of his motivation for writing the book were his hopes that the world will see his 6-year-old as “mixed” or “biracial” as opposed to “black.”

Diggs makes it plain that he wants his son to grow up being self-assured, confident, and comfortable in making decisions on who he wants to be. And you know what? Fair enough. Every parent should want the same thing from their kids. The fact that Diggs penned an open letter to his kid in the form of a children’s book is both admirable and touching; it’s obvious Diggs loves his son and wants the best for him, and that shouldn’t ever be questioned.

And to Diggs’ credit he wishes for a world where the race of his child “doesn’t matter,” and that his son could be called “mixed.” But if we truly lived in a world where race didn’t matter, what’s wrong with his son being called “black?” There is something to be said about celebrating all sides of our heritage, and kids should have the agency to decide who they want to be; we as a society should certainly encourage both of those things.

However, Diggs’ words reveal something much deeper. He thinks he can protect his son from the same trauma he went through as a child by simply encouraging the lad to distance himself from being called “black,” and that’s nothing short of soul-crushing. Sit and contemplate the implications of that statement for a second: Being a “Mixed Me” is inherently easier, inherently safer, than being a “Chocolate Me.”

As a product of a “blended relationship,” (which I suppose is the polite term for “interracial unions” these days) I can tell you Diggs is absolutely right about racism and colorism. As Viola Davis so eloquently pointed out, “the paper bag test” is still very much a real thing. And while our anthropology-major friends are correct in telling us race is nothing more than a social construct, racism is still as tangible as a brick wall. Research shows that skin color is linked to everything from how we perceive age and beauty to how we think people feel pain.

Dark skin correlates negatively across just about every conceivable “beauty” metric, yet Americans still spend almost $3 billion a year to make sure their skin falls within the “not-pasty-white-but-certainly-not-brown” color spectrum. Coarse hair is still so objectionable that black children face expulsion from school for wearing their hair the way it grows naturally out of their heads, but people are still willing to put all kinds of unpronounceable chemicals on their heads in the quest for “thick, wavy hair.”

As such, “mixed” kids (read: “winners of the genetic lottery who’ve come out of the womb “just tan enough”) tend to be fetishized in our society. Go ahead and pop in “mixed babies” into any one of your social media accounts, and I guarantee you’ll land on a page that treats light-skinned babies more like fashion accessories than actual human children.

I know that all my life, from black and white voices alike, I’ve heard how “lucky” I am to have light skin and “good” hair. Having a white father and black mother was somehow winning the genetic lottery. Older black family members sounded a lot like Taye Diggs when they said being light-skinned would hopefully insulate me from the horrible racism they experienced. White people thought it was so cool we got all the “hip” ethnic-y markers without, you know, being like a “real black person” and stuff.

Perhaps more disturbingly, the sheer existence of the “adorbs light-skinned babby” trope has come to symbolize what many hope will be an easy out in our oh-so-desperate-to-be-color-blind society: that racism will disappear if, in Bulworthian fashion, we can just keep cranking out racially ambiguous, butterscotch-colored offspring.

As a nation, the thought that we just have to keep breeding our way into some sepia-toned utopia while bitter old racists finally die off is an absolute delusion. Yes, we are slowly becoming a more “blended” nation, but let’s not start handing out celebratory cookies because in the year 2015, people are finally chill with the thought of interracial relationships.

If anything, America’s move to becoming a post-racial, pluralist nation has resulted in a very violent, very public brand of racism that has in many cases become a youth movement. The presidency of Barack Obama has coincided with a sharp uptick in KKK recruiting of predominantly young whites. One only needs to hop on the ol’ Twitter machine to see the stunning racist vitriol being spewed by white millennials. Dylan Roof was only 21 years old when he gunned down nine people in a predominantly black South Carolina church.

As a father, I applaud Taye Diggs for trying to do what he thinks is right for his child. As a light-skinned black man, I hope Taye understands that regardless of his wishes, positioning his child as less “black” will neither protect his baby nor move us to a more “colorblind” nation. The mixed vs. black argument is pure colorism vanity bullshit. Racists don’t give a half a damn about percentages.

No one has ever spewed less hate toward Obama (the nation’s most famous mixed-raced kid) because his mother is white. Being mixed and well-spoken didn’t save James Blake from being confused for a “black” suspect. And sadly, regardless of adjectives, Taye Diggs is still going to have to explain to his amazing little one what the word “nigger” means the first time he hears it.

It’s tragic and heartbreaking, but we’re still not at a place as a society where how we see ourselves will protect us from how others see us. Racism will persist so long as racists are racist.