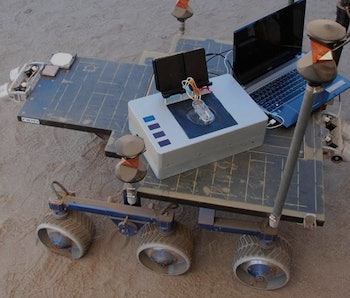 NASA is developing a miniaturized laboratory that can evaluate samples for signs of life.

Existing planetary rovers are already able to look for prospective signs of life—but aren’t designed to actually find living things. However, NASA has been testing a portable device it’s calling a “Chemical Laptop”—which can be loaded onto a rover, and features apps that analyze found amino acids and fatty acids.

Fernanda Mora, a NASA Jet Propulsion Laboratory (JPL) technologist is helping develop the equipment. “Our device is a chemical analyzer that can be reprogrammed like a laptop to perform different functions,” she says, according to NASA’s website.

It’s critical for the proper analyzation of those two acids, as both can exist in living and non-living sources. Furthermore, amino acids both with and without biological potential are equal in magnitude and electric charge—and as NASA JPL’s Peter Willis, the project’s principal investigator explains, the Chemical Laptop has “different apps for different analyses.”

The Chemical Laptop needs a liquid sample to conduct its testing, which—like, for example, on the dry planet Mars—could be difficult to obtain. However, the Laptop can place samples in tubes of liquid water—which would then be heated to the boiling point—separating any organic molecules that may be present. (The instrument suite on NASA’s Mars Curiosity rover utilizes a comparable process, but uses heat without water.)

A heated water sample would then be mixed with a fluorescent stain, then sent into a microchip that can read the dyed liquid with a laser to determine if fatty and amino acids are present, again judging for biological potential.

“This could also be an especially useful tool for icy-worlds targets such as Enceladus and Europa. All you would need to do is melt a little bit of the ice, and you could sample it and analyze it directly.” She also states that, “If this instrument were to be sent to space, it would be the most sensitive device of its kind to leave Earth, and the first to be able to look for both amino acids and fatty acids.”