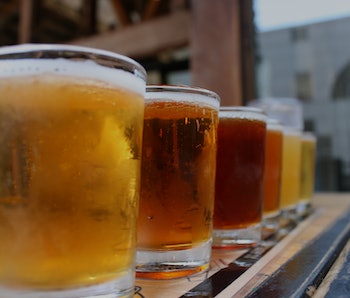 The California drought has turned farms fallow while making the Golden State fertile ground for creative contingency plans. Lenny Mendonca, founder of Mavericks Brewing, has one: He wants to make beer out of greywater, recycled water sourced from sewers. He’s got the tech, now he’s just waiting to figure out how thirsty his public really is.

Mavericks’ recycled-water Tunnel Vision IPA, which was unveiled at the Meeting of the Minds conference in October, is made with 100 percent greywater purified using tech borrowed from NASA, which has long used water-recycling technology in its spacecraft. Only one out of the five judges at the conference’s blind tasting event were able to detect a difference in flavor. That difference was not — it is worth noting — the taste of shit.

Problem is, the thought of drinking toilet and laundromat leftovers is hard for people to swallow. Water scarcity is becoming a big enough problem to force people’s hands (or mouths), but it hasn’t really gotten there for the mass market. What recycled water needs, he says, is a branding overhaul.

“New water is a much better way to think about and brand recycled water than something that’s more generic, like recycled or toilet to tap,” he told Inverse. Of course, he says, the entire debate is “ridiculous” — there’s no such thing as new water because all of it is recycled — but getting consumers to understand this won’t happen overnight.

Giving the public a history lesson might help. After all, using beer to purify water is not a new concept. “This is ‘back to the future’ with beer,” he says. “If you go back to the time of the monks in the Middle Ages, people brewed beer to help purify the water by boiling it. It’s got a long, rich history.” But providing consumers with historical context is less about convincing them to adopt medieval techniques than it is about revisiting old perspectives. “Back then you didn’t have these water systems, so you treated water like the precious commodity that it is,” says Mendonca. “We treat it like it’s free.”

Still, Mendonca remains optimistic despite the fact that, in California, state laws currently prevent him from selling any products made with recycled water. The momentum created by the current drought puts him on the right side of history. But people — and legislation — still need to catch up to the times. Mendonca has a pretty simple strategy for speeding the process.

“You can take two paragraphs to explain it,” he says, “or you can just hand them a beer.” Dude is hitting the non-profit events hard.

Eventually, he hopes to do for recycled water what the “Fair Trade” movement did for ethically sourced goods — that is, make consuming them appealing on multiple levels.

“If we’re worried about water running out,” he says, “why don’t we demand that it’s produced this way?”