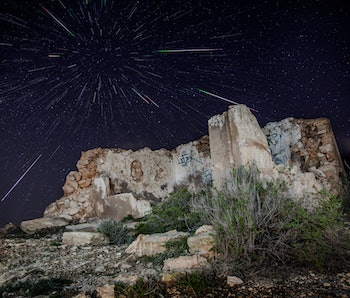 Since its first recorded sighting in 902 A.D. — and presumably before that — the Leonid meteor shower has lit up the night sky every November. The Leonids strike once again this week, and they’ll reach peak visibility tonight. Here’s everything you need to know:

The Leonids are a stream of meteors that appear to radiate from the constellation Leo (hence the name). Every year around November, Earth moves through this stream of particles left behind by comets past — specifically Comet Tempel-Tuttle. When those particles, the Leonids, make their way through the atmosphere, they are moving at roughly 162,000 miles per hour. Larger Leonids are only about 10 millimeters wide, and are less than a gram in mass, yet capable of generating intense lights. The Leonids deposit about 12 to 13 tons of particles into Earth’s atmosphere every year.

Thankfully, the meteors appear pretty much anywhere in the night sky, so all you need is good weather no matter where you are. Unfortunately, while the Leonids often put on incredible light shows, this year’s shower probably won’t be as intense. There’s just not a lot of debris leftover from the last time Tempel-Tuttle came around — and the comet is currently about as far away from the sun as it can be during its 33-year orbit. Whereas one might have seen tens of thousands of meteors every hour in previous years, you might get lucky if you see more than 20 per hour tonight. Expect perhaps one every four minutes.

Which gets to the next point: The shower is peaking Wednesday morning (November 18), sometime after midnight on both coasts. If you’re in a rural part of the country, you’ll have the best view to watch the Leonids. If not, try to find a rooftop, or a place not too far out of the city with less light pollution. Although the Leonids are named so because they seem to radiate out of Leo, they go in all directions, so it’s hard to miss. Just keep your eyes pointed towards Leo, which rises in the eastern horizon at about midnight.

Here’s a succinct, non-verbal argument for going outside this evening:

More like this
Science
Jan. 19, 2023
Our Solar System may be surrounded by a halo of 10 million interstellar objects
By Kiona Smith
Science
Jan. 17, 2023
Why is January so dark and cold? Here’s the truth about winter’s gloomiest days
By The Conversation and Deanna Hence
Science
19 hours ago
This nuclear-powered X-ray “flashlight” may help scientists probe the Moon for water
By Andy Tomaswick and Universe Today
LEARN SOMETHING NEW EVERY DAY.
Share: