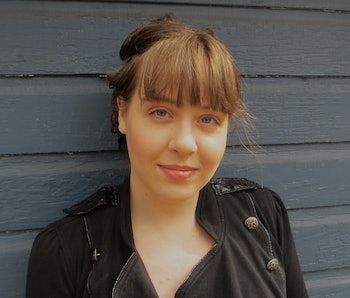 Having fallen into Lightless, a parlor mystery set on a spaceship, we found ourselves with a lot of questions for author C.A. Higgins. So, we gave her a call and talked about what tech inspires her forthcoming sequel, Supernova.

Where do you get your ideas?

I wrote Lightless when I was studying as an undergrad, so I was completely embroiled in physics at the time. So when I made up the world, I tried to have science fiction aspects like a spaceship or a very powerful computer and give them at least a sort of theoretical plausibility — even if, in terms of actual engineering, it would be something almost certainly impossible. I wanted the spaceship in Lightless to have a black hole at the core for a variety of reasons, including that it’s just cool.

Theoretically, that could exist, but practically it’s a bit more involved to actually build something like that. I really wanted to focus on the idea that it could feel like it could be real, even if it necessarily couldn’t be. I wanted to keep an element of the fantastic and the speculative in it.

Did you read a lot of sci-fi growing up?

I read a lot of fantasy actually. And I’ve read a lot of Victorian novels lately more than sci-fi, but I do read sci-fi when I come across it. I watched a lot of sci-fi TV. I loved Star Trek: Voyager when I was a kid. That was my favorite.

What do you think makes a well-crafted sci-fi story?

The characters. I feel that science and the speculative element are fascinating and amazing, but as a story, if it’s not based around interesting and realistic characters, then it’s going to be difficult to enjoy, ultimately.

Each time you hear about some new technological advancement, is a part of your brain sifting through it for a story?

Yes. My brain is always going like that. I don’t know if you saw the commercial a year ago for the Amazon machine that sits in your house and you speak to it and it’ll Google things for you. The first thing I thought when I saw that thing is how it’s going to develop access drones and kill everybody in sight. So every time I look at new technology there’s a part of my brain that looks at it like through a science fiction probe.

What are some other pieces of recent technology that particularly get your brain revving?

Well, my Google account — its ability to show up places even where I don’t expect it to show up — is particularly amazing to me. I gave it a fake name because it kept asking me for a real name and I decided I’d be happier with a fake name. And then that name kept showing up on official correspondence with people I didn’t know had any access to my Google account. That was kind of astonishing and fascinating to me, how deeply the tendrils of that have seeped into my online existence.

When you think about the future, what are you most excited about?

I was just talking to a friend recently about quantum computers, which is a really interesting idea. Instead of having the data encoded in bits, it would be encoded in qubits, which can have more information because they can exist in more dimensions. I thought that was really interesting and I’ve been thinking a lot about that, recently.

When you write these things into a story, is there a tension where you feel you need to boil them down for readers who might not have scientific backgrounds?

Who are some of your favorite sci-fi writers today?

I love Philip K. Dick, his stories are awesome. I’ve been saying this for months, but I’m really excited to start reading Lois McMaster Bujold’s science fiction novels because I read her Chalion series recently and I loved it.

And you mentioned reading Victorian novels — there are a lot of interesting sci-fi books and ideas buried in there. Are there any old-school sci-fi novels you think don’t get enough credit today?

The obvious one is Frankenstein, which is sci-fi and is pre-Victorian, actually. I just think the Victorian way of novels is always very sly humor that you miss if you don’t look for it.

If you’re writing a scene that isn’t working because your science can’t bridge the gap between what’s real and not, how do you make it feel more plausible?

I would probably go read a bunch of papers or Wikipedia articles to try and shape me into looking at it in a different way. I’m usually writing about science that’s speculative now — we don’t know exactly what’s going on, there’s a bunch of theories. So when that’s the situation, there are usually a couple different explanations for whatever science I’m looking at it. Then I can examine the other ways people are thinking about it and look at the way I’m thinking about it and think, “Which way would best further the story and seems more plausible?”

Well, you couldn’t shoot with guns because it would ricochet everywhere and hit everybody, so I guess you’d have to be good at hostage negotiation. Or start using swords again. That would be cool. Somebody should write that.

More like this
Entertainment
6.16.2022 1:00 PM
How Rings of Power expands Tolkien’s world by “honoring his work”
By Eric Francisco
Culture
6.20.2022 11:36 AM
Look! 8 bodacious pages from Netflix’s Stranger Things coloring book
By Robin Bea
Entertainment
21 hours ago
Everything we know about Dune: Part Two
By Gabrielle Bondi and Ryan Britt
Share: