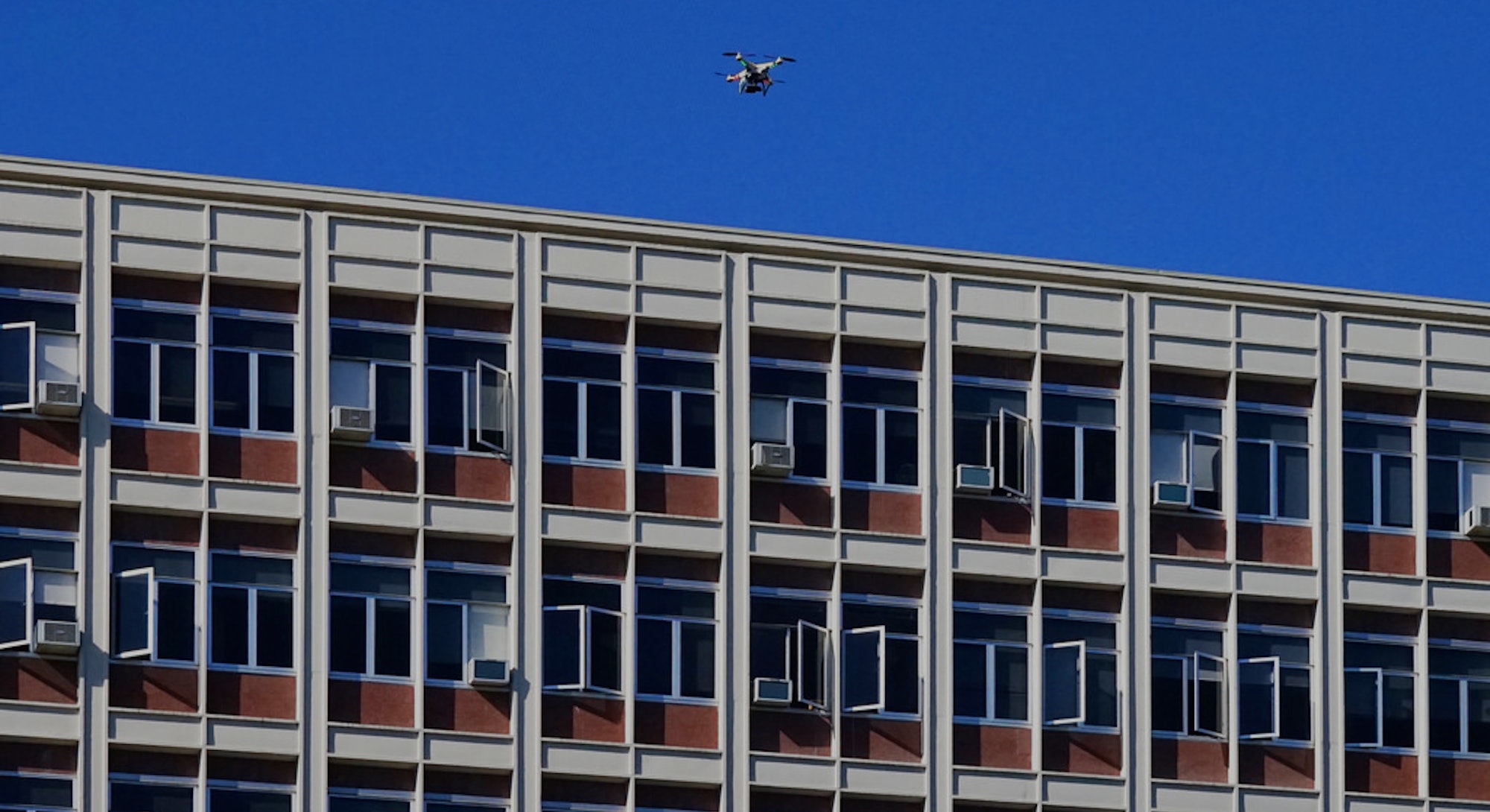 In one technologically utopian vision of a college campus, drones flock through the air, leading lost freshman to class, dropping off packages at dorms, and taking sweeping shots of commencement from the sky. A bit of that future is distilled in Skycall, a project from the Massachusetts Institute of Technology, turning a small quadcopter into a campus guide.

The system debuted in 2013 with a cheeky video of a drone shepherding a wayward Harvard student through the MIT labyrinth, but it wasn’t meant to become a fixture. “Skycall, like most of our projects, was a demo: A working prototype to explore new interactions with the built environment, but not an operating platform,” says engineer and architect Carlo Ratti, of MIT’s Senseable City Lab. Though the ingredients are there — engineering savvy, open green spaces, plenty of leisure time — drones are far from a college staple. We’re going to have to keep waiting for big drone on campus.

There are plenty of programs involving drones at MIT, as Ratti points out, but “most of the tests happen indoors, because of FAA regulations.” The Federal Aviation Administration’s rules are more stringent for non-recreational projects, like Skycall, requiring would-be UAV operators to file for exemptions or prove their airworthiness. The biggest restrictions on hobby aircraft flights, on the other hand, are that you can’t fly above 400 feet or within five miles of an airport. Otherwise, a 54-pound model plane is permissible in airspace that has been rendered drone free.

To the FAA’s credit, it is actively exploring new ways to regulate civilian drones, having created a task force to determine how an unmanned aircraft system registration might work. (The agency woefully misjudged how quickly drones would become popular.) As the FAA’s rules evolve, so are university policies. But college guidelines are moving in exactly the opposite direction.

In late June, for instance, the University of Wisconsin-Madison began requiring students to get permission 24 hours in advance of launching a drone; in November, that policy was updated: drones are not permissible for students on campus. The college cited the “risk management/liability issues” as the reason for its decision.

At the end of August, the University of Arkansas banned drones on campus, citing safety concerns. “I wouldn’t say drones have been problematic on campus although we have had a couple of violations during and after outdoor athletic events,” Mark Rushing, a representative for the university, told Inverse. “The policy was adopted as a proactive measure to avoid future issues as the number of drones grows rapidly.”

Three groups have since approached the University of Arkansas to get permission to fly. One was approved; the others, including a group asking to get aerial footage of a wedding, were denied.

That’s not to say that ivory towers aren’t sharing any airspace with drones. Colgate University, rather uniquely, allows students to check out drones from the library. And groups of student drone enthusiasts are starting to congeal on campuses as well. One such organization, the Ohio State University Drone Club, is less than a year old. The purpose, says Club President Joshua Cheston, an engineering undergraduate, is to teach students to fly drones and build their own multirotors. Still, the group has found itself serving in part as a liaison between administrators and hobbyists.

For now, Cheston and the other club members leave campus to fly. “There is a park that is right across from the north side of campus that consists of baseball and soccer fields,” Cheston says. He wants to fly there and he can’t — even though the university isn’t necessarily opposed to it. “They aren’t against us flying, they want to see us fly,” he adds, adopting a philosophical attitude toward safety requirements.

Either because of restrictions or because restrictions are unnecessary, there has yet to be a major accident involving hobby drones on a campus. This is not to say that accidents don’t happen; they do, particularly when you have a lot of first-time fliers. (Given falling costs and increased interest, the FAA predicts about a million drones will be sold this holiday season). Recently, a 24-year-old law student smashed a drone into the side of a University of Kentucky football stadium. No one was hurt, but the student was charged with wanton endangerment.

Back at MIT, Ratti points out that not just physical harm but privacy, too, could become an issue. “The ability to collect digital information on a massive scale could go from a tool of potential liberation into an instrument of abuse, surveillance and asymmetrical control,” he says. “We believe that it is important to develop open and public platforms for flying drones in urban areas.”

The success or failure of projects like Skycall and groups like OSU’s Drone Club will help shape the debate that, in turn, shapes whatever platforms are eventually developed. The same can be said — somewhat paradoxically — for those efforts that never get off the ground because of campus rules. It’s unclear whether higher education will get to participate in, much less guide, the debate around drones if they reflexively banish them from campus.

The next generation of UAV innovators is currently in college — a statement that will be true in perpetuity — the question is what exactly they’re being taught.