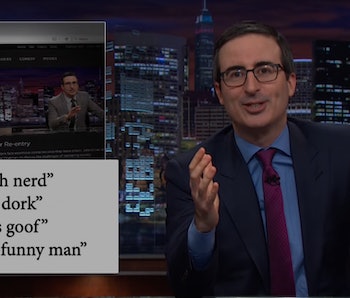 John Oliver reliably puts his jokes into the real world, memorably with one-off websites or buying air time on TV in other countries. But on Sunday night he lied about the metadata on his own website. It’s unclear if he should ever be trusted again.

In his biting critique of gambling daily fantasy sports websites — DraftKings, in particular — Oliver points out that they have used search-engine-optimized (SEO) keywords that use the word “betting” to signal to Google that, yes, it’s gambling — even when executives claim otherwise.

Oliver shared his own SEO tags that his tech team uses to promote the program’s website. Apparently, anybody interested in finding a “british nerd,” “brit dork,” “news goof,” or “birdy fact funny man” will come across the Last Week Tonight website, whether they like it or not. Well, those aren’t present in his metadata.

All you have to do to see a page’s metadata is right-click and select “View Page Source” (on a Mac). “John Oliver” comes up quite prominently in his page source, but the rest, not so much.

Neither the source, nor the meta tag has the keywords:

Not even “British” comes up with a quick command-F search.

To be fair, “betting” is no longer on DraftKings.com, but Oliver’s news does come from mid-October.

Lying for the sake of a joke is not Oliver’s M.O. He often looks to what’s actually happened and jokes about it, or he makes the reality himself. For instance, he once made a website that could generate fake quotes because he’s often credited as having said something about airports that he’s never uttered. (Seriously, I spent hours trying to find proof.) In that same episode, he taunted Canada by breaking an antiquated election law, practically begging to be fined in real life.

On another Last Week Tonight, Oliver revealed that he put up an actual billboard in North Dakota, encouraging locals to “Be Angry. (Please.)”

Perhaps most extraordinarily, Oliver took out a real five-minute advertisement in Trinidad & Tobago. Following this summer’s FIFA corruption scandal, he urged T&T’s Jack Warner (the former Vice President of FIFA) to snitch on his colleagues and think of the greater good. The stunt was so effective and so grounded in reality that Warner actually responded to Oliver.

The world is absurd and Oliver’s humor thrives on simply pointing out that ridiculousness. That’s what makes last night’s colossal SEO gaffe so potentially discomfiting to Oliver’s fans. We trust you, John. You’re not supposed to make jokes without facts. You’re a “birdy fact funny man!” Or at least we once thought you were. Not anymore.

Or until next Sunday’s episode.

Update 11/17 10:19 a.m.: As Doug Pierce, Head of Search & Analytics at Cogney, points out, “betting” does remains as one of DraftKings SEO terms. Just inspect the element on their fantasy baseball site! Read his blog post about analyzing the DraftKings SEO here.