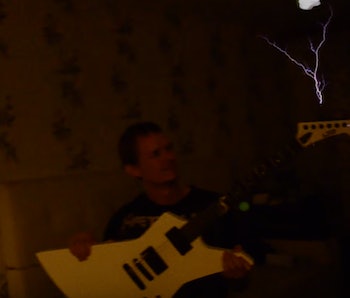 YouTube user Zilipoper is a demented sorcerer: By the looks of his channel, his home routinely serves as the smoke-riddled backdrop for experiments with homemade pyrotechnic tools, some of which spark flashes of orange flames in his bathtub, and others harnessing electrical currents to create music.

It’s an unconventional and extremely dangerous way to bide one’s time at home, and watching Zilipoper’s antics through the comfort of an internet connection makes for an interesting dive into the world of crudely assembled gadgetry.

Behold, Zilipoper entices the world with his musical acumen.

From the looks of it, he is a Metallica fan, but one who feels that True Heavy Metal can only be achieved when streaks of purple electricity jolt from a guitar.

At the outset, Zilipoper provides the moment’s musical overture by calmly strumming the band’s song “Fade to Black.” Then things get really heavy: The lights turn off and torrents of florescent purple whoosh from Zilipoper’s guitar-as-conductor.

Uploaded today is footage of Zilipoper tinkering with a high-voltage transformer he cobbled together with some pretty standard electrical equipment.

Shockingly, the danger-level here is quite benign, relative to some of the other contraptions Zilipoper has engineered. He looks relaxed in his element, as he repeatedly zaps the 7 kilovolts that pump through the D.I.Y. transformer while filming the charade with his iPhone. Zilipoper certainly deserves points for multitasking.

Also, look at the electrical ark generated from simply tapping a wad of tinfoil with all that voltage. It is pure fire: A magic wand to wield carefully, if you will.

Zolipoper gets all sorts of conductive with this homemade Jacob’s Ladder.

Zilipoper’s video of a Jacob’s Ladder is the most calm and traditional of his experiments.

It’s got a nice current, and whoever lives next door to Zilipoper probably cherished the time their neighbor spent working on much more gentle activity, even though it’s still packed with super high-voltage.

This video from last October shows that Zilipoper is a really creative dude.

Here he put the electrical currents toward the much more rhythmic end of making funky beats.

This is real electro:

Zilipoper uses the same spark gap Tesla coil to produce the wispy purple stream, but programs the current to correspond with MIDI technology, and the result is a tune not that far off from “Play that Funk Music White Boy.” As the music gets gradually more wild, it sounds and looks like something you might see in a modern art museum.

Lastly, Zilipoper moonlights as a viking.

Could you imagine sitting next to someone wearing this hat at a bar? Would you want to?

Are you Zilipopper? Please get in touch (sam.blum@inverse.com). We’d love to hear more about your videos.

More like this
Entertainment
8.4.2022 4:14 PM
53 sci-fi and DC shows and movies on HBO Max you need to watch ASAP
By Jake Kleinman, Eric Francisco and Ryan Britt
Gaming
8.9.2022 6:46 PM
League of Legends Star Guardian concept art is an emotional trip
By Robin Bea
Culture
8.2.2022 11:30 AM
You need to watch the greatest Marvel movie ever on Netflix ASAP
By Alex Welch
Share: