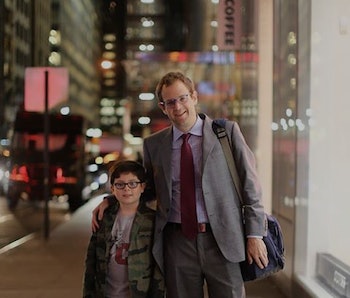 Humans of New York does not usually serve to inform the public about space exploration, however the son of a CNN producer has inadvertently changed all that in a dialogue with NASA.

Telling HONY creator/curator Brandon Stanton that he wants to follow in his fathers journalistic footsteps one day, the young boy said:

“My dad goes all over the world and learns about the news. One time he met a king. I want to be a reporter too. If I was a reporter right now, I’d probably write a story about if NASA was going to launch a new rocket into space. I’d start by going to the Director of NASA. Then I’d ask him about his rockets. And if any of them were going to space.”

And being that this is the era of Facebook-dominated hyper-connectivity, NASA responded, offering a morsel of its interesting science in a comment:

What NASA is stating here via Facebook is its eventual plan to send humans to Mars. On its website, NASA elaborates a little bit about the Space Launch System:

We assume the young reporter will be following this story as it develops.

More like this
Science
5.10.2022 12:00 PM
NASA images reveal a man-made scar in the Amazon so big you can see it from space
By Pritam Das, Faisal Hossain, Hörður Bragi Helgason, Shahzaib Khan and The Conversation
Innovation
5.6.2022 12:00 PM
NASA wet dress rehearsal woes set back launch date of Moon mega-rocket
By Doris Elín Urrutia
Science
5.19.2022 11:00 AM
NASA InSight shutting down and more: Understand the world through 9 images
By Robin Bea
Related Tags
Share: