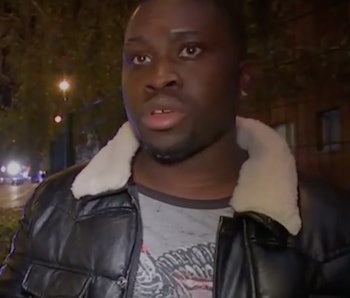 During a catastrophic event, technology can save lives and offer people immediate safety that may not have been as easy (or fast) in the days before the advent of smart phones and social media.

Last night’s horrific terror attacks in Paris showed that there were thousands of people willing to help out however they could — whether it was offering safe shelter or finding loved ones. No doubt, this level of communication wouldn’t have been as viral had it not been for smart phones.

However, what about the physical benefits of smart phones?

One man near the Stade de Paris found out that having his phone in the right place at the right time may have saved his life… much like the speech and glasses case that saved Teddy Roosevelt’s life in 1912.

Last night, Silvestre was finishing up a phone call when an explosion went off nearby. A piece of shrapnel flew up and was blocked thanks to Silvestre’s phone. The man’s Samsung was badly damaged — the screen was cracked where the debris had smashed through the back of the phone — but luckily he escaped unharmed.

If you’d like to help the victims and survivors in Paris, you can donate to the Red Cross.

More like this
Innovation
November 16, 2022
Your next phone could be made of mushrooms
By Joanna Thompson
Gear
November 23, 2022
Everything we know about Samsung’s Galaxy S23 and S23 Ultra
By Jackson Chen
Entertainment
November 29, 2022
The Guardians Holiday Special has a secret Star Wars reference
By Eric Francisco
Share: