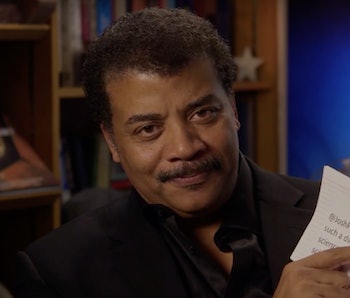 Astrophysicist Neil deGrasse Tyson is no stranger to criticism from laypeople. Heck, he was once called out on Twitter for using his laptop on the subway.

So it’s no surprise that the outspoken Star Talk host would draw some ire for his apt criticism of the faulty science behind some of cinema’s biggest blockbusters (cough, Gravity, cough). National Geographic got Tyson to sit down and read some of the biting tweets against him on video… and let’s just say that Tyson’s getting the last laugh here.

One user, @JoshFromSchool called Tyson a dweeb and tweeted that “Nobody even watches science fiction movies for the science.” Needless to say, Tyson shut JoshFromSchool (and his username) down hard.

But that wasn’t the last we’d heard of JoshFromSchool, who once again took to Twitter to voice his grievances. (And use the word “dweeb” again, which is kinda dweeby, right?)

Watch Tyson call out the rest of the blockbuster-loving meanies on Twitter in the most entertaining fashion: