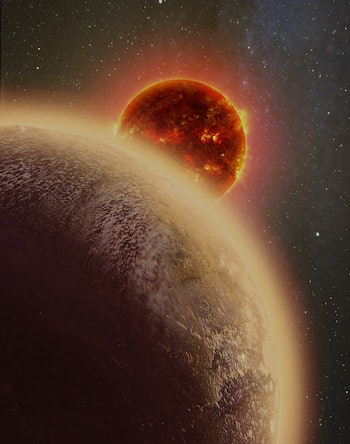 We know how unique the Earth is, given that we are constantly looking for a planet like ours, yet have only found parts and pieces in other worlds residing in the universe. On the other hand, other “twin planets” in the solar system seem to be a dime a dozen. In findings reported Wednesday in the journal Nature, a team of scientists led by MIT’s Zachory Berta-Thompson have just discovered an exoplanet that bears a stark resemblance to Venus, and resides 39 million light years away — just a stone’s throw when it comes to the scale of the cosmos.

The new discovery, named GJ 1132b, has a fairly similar size to Earth, and the research team believes its geological composition is similar to our rocky blue planet. It orbits a red dwarf star that’s about a fifth the size of the sun, and several times dimmer.

Despite the relative weakness of its star, the planet is roasting away like an egg on pavement during a summer afternoon: The surface can heat up to about 500 degrees Fahrenheit. There is defintely no liquid water sitting around waiting for primordial life to evolve out of the heat. It’s no way inhabitable — at least not by life as we know it.

GJ 1132b is, however, cool enough to retain an atmosphere. And because the planet is so close to Earth, it’s an incredible opportunity to study an exoplanet that has retained a vibrant atmosphere for quite some time. Most exoplanets thus far have been violent balls of rock that heat up to over a thousand degrees Fahrenheit. The research team hopes to be able to follow up and discover more about GJ 1132b in detail — including wind patterns, the chemical makeup of the atmosphere, geologic features, and even the color of its sunsets.

Having only just discovered GJ 1132b, the research team has little idea of what these features might look like. Even less is known about what the atmospheric and geological histories of the planet are, and whether they may have been more Earth-like in the past.

Berta-Thompson is optimistic that the rest of the scientific community can use telescopes like Hubble or the upcoming James Webb Space Telescope to detect and measure the presence of gases like carbon dioxide, oxygen, or even water vapor, to better understand the molecular composition of the atmosphere, the thermal radiation from planet’s surface, or how its wind circulates heat around the planet.

“We hope to learn about how the planet got its atmosphere in the first place,” he says, adding, “and how the atmosphere may have been sculpted over billions of years of evolution.”

Like nearby Venus, GJ 1132b provides an opportunity to study an extreme world that sheds light on what our own planet might have looked like if conditions were right. Venus is often thought of as an alternate version of the Earth that unfortunately sits too close to the Earth. GJ 1132b, in being Venus’ “twin,” might possibly have its own Earth-like foil, where the conditions are right enough for life to evolve. We’ll keep our fingers crossed that’s the case.