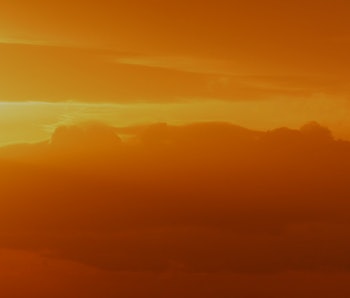 Astronomers and astro-biologists have long operated on the principal that extraterrestrial life will most likely be discovered on a planet that looks like Earth. Still, Earth hasn’t always looked the same, pale and blue. New research indicates that we may well want to look for something orange, a planet that more closely resembles the Earth of old.

That’s the idea behind the work by researchers at the University of Washington’s Virtual Planetary Laboratory, who are using simulations to investigate the potential for different exoplanets to sustain life. Their job is to think about what might be alive now in terms of deep time.

About 2.5 billion years ago, a hazy atmosphere covered our planet and helped cool it down so that ancient bacteria could evolve. Researcher Giada Arney, in findings she and her colleagues presented today at the American Astronomical Society’s Division for Planetary Sciences conference, suggests that the key to discovering alien life might be keeping a weather eye on chemical signifiers.

During the Achaean era of the Earth, our planet was shrouded by a thick, organic, pale orange atmosphere produced by ultraviolet light breaking down methane molecules into what Arney calls a “hydrocarbon haze.” This was at a time when our planet had very little free oxygen, so the methane build up, Arney suspects, was triggered by living organisms.

“Since the methane fluxes required to maintain the haze on early Earth would have been higher than what we think the non-biological processes could have generated, life could have had a key role in generating this haze,” Arney says.

The Earth during the Archaean era was a hot mess. Without an ozone layer (made from oxygen), the planet was getting hit by direct ultraviolet light at basically sterilizing levels. “Life would have had to take refuge under other types of UV shields (e.g. water, minerals) to survive,” says Arney.

Through photochemical, climate and radiation simulations of an early Earth, Arney and her colleagues found that a hydrocarbon haze would act as a UV light buffer that allowed the planet to cool down and give radiation-tolerant organisms time to colonize the land. This means not only is the haze a kind of signature of biological life since it is most likely produced by early organisms, it is also a conduit towards helping those very organisms evolve into more complex bacteria and primitive plants and animals.

Exoplanet research has yet to look specifically for signs of early Earth-like atmospheric haze, although there are a few worlds out there exhibiting strange hazes and clouds of unknown composition. We actually have one place nearby we ought to keep an eye out for: Saturn’s moon Titan, which currently possesses a very similar haze to Archaean-era Earth (in addition to those mysterious lakes).

Life on a different planet could have evolved to survive under much different circumstances, but our best bet currently is to look for what we know to be the conditions necessary for even the most basic organisms to exist.

“We can consider early Earth as an analog for a very different kind of habitable planet with the advantage of the fact that we have a rock record that tells us what things were like back then,” says Arney. “By studying early Earth, we can better understand the climate, surface conditions and atmospheric properties of planets with anoxic environments.”

And the more we know about those worlds, the better able we can scan for and identify E.T. when we see it.