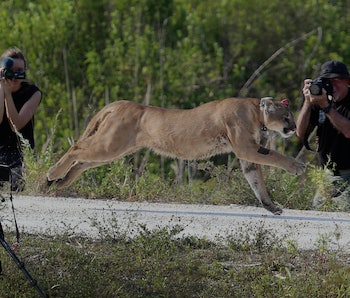 Florida panthers are dying along Alligator Alley. Drivers on the Everglades highway stretch have hit and killed 14 of the critically endangered wild cats since 2004, so state transportation officials are moving to build a wildlife-exclusionary fence on nine miles of the highway to slow the carnage.

The panthers need all the help they can get. The National Wildlife Foundation estimates there are barely 100 Florida panthers still living in the wild, most near the swamplands in the southern part of the state; the Florida Wildlife Federation puts the number around 180. Losses from just about any threat could wipe them out, be it habitat loss or pollution or, yeah, being hit by a car crossing the road on this stretch of Collier County road from FakaUnion Canal Bridge to the Naples toll booth.

Which sucks, because these are amazing animals, elusive to the point of almost ghostlike stature in their home state. Unlike their jungle cousins, the Florida panthers are slinky golden beasts more likely to purr or hiss at you than roar, and whose lifecycle is like a rollercoaster of adorableness that starts at the top.

Later on they end up shedding the baby cuteness and end up lean golden gods of being chill as hell.

Of course some people don’t like any government spending, such as Fort Meyer resident Ken Miller, who told Wink News: “I’ve driven Alligator Alley before, I’ve never seen a panther. I’m aware that they’re there and I think if I did see one, I’d probably be able to avoid it.”

Much as we might dream, we can’t all be Ken Millers, whizzing about with our lemur-like reflexes behind the wheel. And even if you do avoid the panther, a stretch called Alligator Alley isn’t a part of road where it sounds advisable to potentially swerve your car off the concrete and into the mud. This project will protect just as many drivers as it does panthers.

More like this
Science
11 hours ago
The Plague Is Still Here — And It Could Infect Your Cat
By Tara Yarlagadda
Science
Feb. 1, 2023
Look! Five New Snake Species Discovered in a Habitat Devastated by Mining
By Robin Bea
Science
Jan. 29, 2023
Are coyotes dangerous to dogs and cats? Here’s how to keep your pets safe
By Tara Yarlagadda
LEARN SOMETHING NEW EVERY DAY.
Related Tags
Share: