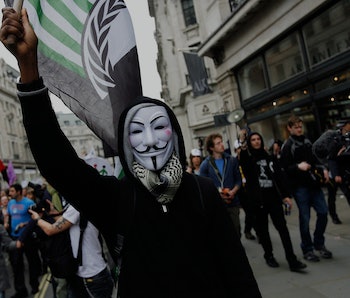 Guy Fawkes was a 17th century British solider who sought to eviscerate British Parliament in 1605 and restore a Roman Catholic monarch to the throne. Improbably, he lives on today as sort of a bastardized symbol of anti-capitalism and in some more unfortunate circumstances, vandalism.

Every November 5 is “Guy Fawkes Day,” honored with an 1870 folk verse that begins:

The fifth of November,

The Gunpowder treason and plot;

I know of no reason

Why the Gunpowder treason

Should ever be forgot!

Guy Fawkes and his companions

Did the scheme contrive,

To blow the King and Parliament

“Guy Fawkes Day” is recognized in cities across the world, as in the third annual “Six Million Mask March” — which, as it’s organized by hacktivist group Anonymous, promises to revel in themes of anti-surveillance and government transparency.

Except authorities in London weren’t warming to the prospect of swarming bands of masked, hooded bodies taking to the streets. Scotland Yard earlier braced itself for a dicey evening, fearing that activist euphoria might spark a grimmer turn as people leave work and the city streets flood with traffic.

“This night “has been marked by significant levels of anti-social behavior, criminal damage to monuments and buildings, attempts to take over buildings, harassment of motorists and attacks on police officers.”

“Last year hundreds of people on their way home from work, or out enjoying an evening in the Capital, were surrounded by people causing them huge concern. Buses were physically rocked, people jumped on car bonnets, as well as serious disorder in central London and damage to a number of buildings.”

Scotland Yard shut down some of London’s busier areas tonight, citing Section 12 of the city’s Public Order Act, which stipulates that organized protests can occur only within certain geographic confines.

Tweets from journalists covering the demonstrations show streets that have gotten punchy:

Anonymous, the online organizer of the event, which closely aligns its public image with the famous Guy Fawkes mask, issued a statement regarding tonight’s Six Million Mask March.

It paints a much different picture than of the lewd vandalism that seems to have consumed London tonight:

“The message for this year’s Million Mask March is building a better future through collective action. While individual participants may have different ideas about what a better future looks like, they will be demonstrating together in support of Anonymous’ methods and the continued ability for people to congregate under their banner and take actions anonymously.”

There’s no cohesive leadership guiding a reportedly international series of ongoing events tonight, but a map posted to a website claiming to represent the official headquarters of the march shows a series of worldwide locations:

In Washington D.C., for example, 26,000 attendees RSVP’d to a Facebook page for the march, which was set to take place at 9 a.m.

However, the march in the American capital hasn’t taken on the intensity of its counterpart in England.

In London last year, reports of harassment and some senseless vandalism made headlines.

Guy Fawkes Day has been a traditionally peaceful event in the UK, with small towns and bigger cities putting on firework celebrations in similar fashion to the 4th of July in the United States.