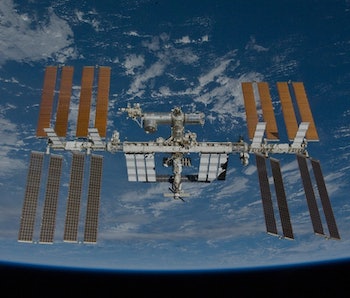 Medical personnel aboard the International Space Station are currently studying space headaches. Of course, sci-fi fans know about cool space headaches — like when the hyperdrive of the Millennium Falcon fails, or when a Tribble gets into your chicken sandwich — but for real life astronauts, a space headache is a malady that’s zero enjoyable in zero g.

According to NASA, headaches are common occurrences during spaceflight. To better determine what’s behind the pain, a trio of doctors from the Leiden University Medical Center are working aboard the ISS, studying to determine if headaches happening while in microgravity represent a condition different from other potential or typical causes.

The current theory is that space headaches are a result of the “limitations of an air cleansing system in an artificial atmosphere,” citing high levels of carbon dioxide as a possible headache trigger. Weightlessness is also believed to be a culprit: “The amount of fluid that shifts out of an astronaut’s legs and toward his or her head during long-duration spaceflight is equivalent to a two liter bottle of soda.”

The study will involve analyzing post-flight data from past space missions, examining the frequency of head pain occurrences among the current ISS crew, comparing the descriptions of headaches given by crewmembers (in order to catalogue the headaches according to the International Classification of Headache Disorders, which is actually a thing) and then lay the groundwork for developing remedies.

But before you pooh-pooh this experiment, just because it’s unlikely you’ll be blasting off anytime soon, keep in mind the doctors up in orbit are also hoping to gain insight on how to battle headaches down here on Earth – so if you ever spot the ISS crossing the sky, know that some of its crew are hard at work, trying to figure out how to keep your noggin feeling fine.

More like this
Science
Feb. 1, 2023
65 Years Ago, America Launched Its Most Pivotal Space Mission Ever
By Jon Kelvey
Science
Jan. 25, 2023
40 years ago, NASA launched the space telescope that proved JWST could work
By Jon Kelvey
Science
12 hours ago
Exclusive: NASA Explains How the Voyager Missions Could Live Until 2035
By Kiona Smith
LEARN SOMETHING NEW EVERY DAY.
Related Tags
Share: