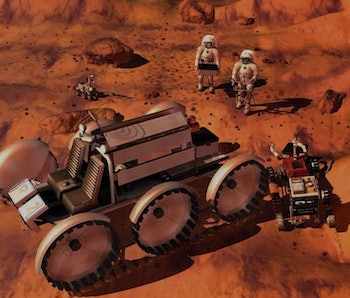 The U.S. is miles ahead of the rest of the world when it comes to prepping for a trip to Mars. With a targeted landing data in the 2030s, NASA is the only space agency on the planet that’s currently capable of getting astronauts to and from Mars and the prohibitive favorite to do that (while keeping them alive).

But that doesn’t mean the rest of the world isn’t considering a trip next door. In fact, the Mars race is very much on. Here’s a quick glance at the progress being made by space programs around the world. The competition is real — in the mind of the competitors anyway.

America’s biggest space rival, Russia, hasn’t had much luck with Mars. Besides a few missions in the 1960s and ‘70s involving unmanned probes, the country didn’t make any real efforts to explore Mars until this decade. In 2011, Russia launched an ambitious, awesomely named mission called Fobos-Grunt to send a lander to Mars’ moon Phobos. Fobos-Grunt would retrieve a rock sample and bring it back to Earth, as well as help send a Chinese probe into Martian orbit.

The whole plan bombed. Roscomos, the Russian space agency, lost contact with the lander mere hours after it was launched, and was unable to switch on the subsequent rocket burns necessary to send Fobos-Grunt on its way. Stuck in Earth’s orbit, the craft soon fell back into the atmosphere and was destroyed (along with the Chinese probe) upon reentry.

Roscomos is now ready to jump back in the game. It recently announced plans to send several trained rhesus monkeys to Mars in 2017. As we speak, there are monkeys spending three hours a day at the Institute of Biomedical Problems in Moscow learning how to use spacecraft controls and do math. “What we are trying to do is to make them as intelligent as possible so we can use them to explore space beyond our orbit,” lead trainer Inessa Kozlovskaya told The Daily Mail.

So yeah, we’re still not talking humans, but if Russia is successful in their plans, they would be the first country to send mammalian life to Mars. That has to count for something, I suppose…

The ESA is no stranger to Mars — its biggest achievement is its Mars Express orbiter, currently taking plenty of high-resolution images of the Martian surface and studying the planet’s geology and atmosphere. But it’s hungry for more.

Which brings us to the ExoMars mission, a joint collaboration with Roscomos to send an orbiter and a rover to the red planet’s surface and study it like never before. The entire spacecraft will be launched in March 2016, for a planned arrival to the Martian orbit by the following December. After a landing site is selected, the ExoMars rover would be jettisoned and allowed to set its wheels down on the surface of the planet sometime in 2018.

The purpose of the mission would be to investigate signs of past and present life, and conduct more analysis on aqueous and geochemical environments that could have or can currently sustain life. The rover would also be tasked with acquiring a sample that could later be used in a sample return mission.

Again though, humans are not in the ESA’s plans for Mars (neither are non-native species of any kind).

China has made some signficant strides in space exploration at speed, having already established a crewed program and in the midst of a big lunar exploration program. There’s no question they are now playing in the big leagues and that has everything to do with funding. The Chinese aren’t bogged down by a thousand big projects at once — only a few, specific tasks that can be completed relatively quickly. If there is a dark horse in the race that might upset the U.S. and get humans on Mars first, it is definitely China.

Unfortunately, they don’t have much progress to build on right now. As stated above, China’s single mission to Mars — a space probe that tried to hitch a ride with Fobos-Grunt — ended in failure.

The country’s not giving up. Today, the Chinese government announced plans to land its own rover on Mars by 2020, showing the probe’s capabilities off at a demonstration. It lacks the state-of-the-art instruments and features that adorn NASA’s Curiosity ESA’s ExoMars rovers, but it’s still an impressive milestone for a country whose current space agency is only 18 years old.

If a crewed mission to Mars were in China’s plans, it would probably be centered around a very focused goal of getting astronauts on the surface and then headed back home as soon as possible. Bragging rights > actual scientific exploration.

More like this
Innovation
8.13.2022 3:00 PM
Mars City: 3 Red Planet resources could forge a critical building material
By CAROLYN COLLINS PETERSEN and Universe Today
Science
8.5.2022 12:15 PM
10 years ago, the Curiosity rover arrived on Mars — and revolutionized the hunt for alien life
By Allie Hutchison
Science
8.13.2022 10:00 AM
How the Webb Telescope could unveil the newborn universe
By CAROLYN COLLINS PETERSEN and Universe Today
Related Tags
Share: