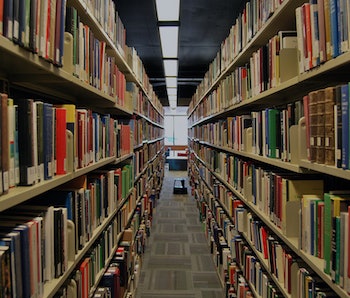 Let’s say you want to make a mindbogglingly huge collection of books — say, every book ever — you could do worse than play by the rules set out in Jorge Luis Borges’ short story The Library of Babel. Here’s how it goes: In a vast expanse of six-sided rooms, the walls are lined with every random permutation of a 410-page novel, with 40 lines of text per page and 80 characters per line. Most of the books are drive. Some are brilliant. Because math.

Writer and programmer Jonathan Basile was so inspired by this idea of poetic emergence that he created a non-hexagonal (the six-sided thing was kind of random) Library of Babel online. The result is a wondrous mash of coding and philosophical thought experimentation. The library contains the whimsical — every alternate version of every book you love (“In a hole in the ground there lived Harry Potter”) — as well as a description of your death. Does it mean that Basile is something of a Schrödinger’s author, simultaneously creating the best and worst novels, ever? That depends on your definition of author, but what’s abundantly clear is the whole lot is smothered in a tar pit of nonsense.

Inverse asked Basile, who’s exhibiting the library on Friday at the New York art gallery Recess, for a tour through the stacks.

What inspired you to create the library?

I was just lying in bed one night and had the idea that the Library of Babel — that could be a website. That was an unprecedented idea for me, because I had never done any programming and really hadn’t had any interest in expressing myself in the technological realm before. So, in that sense, it was kind of out of the blue.

How many books are in the library?

The version that’s online now went up in May. There was about a month and a half where the first version was online — the first version was text on disk; it would just read from text files to retrieve pages from books. There were about a million books. Then I figured out an algorithm so you wouldn’t have to store any information on disk. It went from a million books to 10 to the 5,000th book in about a month.

You’ve got one of every page possible, right, but not every book?

It’s just a matter of the number of operations to construct one page of text. Basically there’s a series of conversion operations going on. You have to do those operations 3,200 times for one page of text, and to make an entire book you have to do them 1,312,000 times. So making a page takes less than a second. Generating an entire book takes about 4 to 6 seconds. It’s just a little bit too slow for the internet. It’s not impossible by any means, and I’m working on a downloadable version that will have every possible 410-page book in it. But I just thought that given the speed at which things move on the internet, it was ideal to restrain the contents of the library.

What have people been doing in the library?

A recent trend I found on Reddit is if someone posts something truly, truly bizarre, usually at some point in the conversation someone will say, ‘Those words have never appeared together in the English language before!’ And then the next link will be a link to those words in the Library of Babel. That’s happened a few times recently.

Does anyone randomly plunge through the books?

From some of the things that people post in the forum, I can tell that some people are surprisingly thorough and patient about being willing to search through pages of random text. It’s difficult in certain cases to tell if someone has searched for a text or has found it at random, but one way you can be certain is that text you searched for will always appear with index numbers — the hexagon that they’re located in — towards the higher end, in the range of possible hexagons, just due to probability. If you’re searching for text, it will almost always be in a hexagon that has about 3,200 characters in its name. But some people have posted things from very low number indexes in the library, which is a sign they have found them at random. It’s always very sparse the amount of text you can find on a page that you just opened at random. You usually can’t find more than seven letters of consecutive English, but someone did find a page that had ‘your mom’ on it, just by looking through random page after random page.

As you were creating this, were you concerned that Scholastic or somebody else might find the story of Harry Potter in there — which it is — and then come back to you and say they want to take this part down? Do you think that’s a likely scenario at all?

I don’t think it’s particularly likely. I don’t think the website is an especially practical way to disseminate text. It’s definitely something that I’ve thought about, but in a sense of intellectual curiosity. A lot of the concepts that the system of copyright depends on are undermined — and I don’t mean undermined in the sense that it’s violating the law. But it’s placing these concepts in question. It’s leading us to think differently about the concepts that are undergirding our legal system.

The main thing that I would point out is that in our legal system, we have a lot of protections for artists and authors to reference and cite and parody each others’ works. That’s always protected, even when the work is copyrighted. If that weren’t the case, every time a scholar cited some other text or a comedian impersonated some other artist, that would be illegal. In order to have an actual culture of creativity, we have to protect these kinds of reference. And that type of referentiality — of recontextualization — is exactly what’s happening in the library. We can take text that we’re used to encountering in a certain context, attached to the intentions of a speaking subject, and we can find it in the library completely outside of that context. That’s exactly what’s happening.

How would you define your relationship with the library?

I think I created another iteration of a very old idea. This had existed long ago in ancient Greece as a philosophical thought experiment, and has existed for at least a century in other variations as a literary idea, as a short story. And now it exists as a website or computer program, so I’ve added a link to a chain in that sense.

One of the things I’ve been really glad to see recently is that a lot of people have been coming to the library who have not heard of Borges, and are learning about his work and the short story. Which I think is great, because I’ve been a fan of his work for so long. I’m just happy that what I’ve done is leading more people to discover him.

More like this
Mind and Body
6.15.2022 12:00 AM
The right time to make a decision may depend on this overlooked biological factor
By Jocelyn Solis-Moreira
Entertainment
6.16.2022 1:00 PM
How Rings of Power expands Tolkien’s world by “honoring his work”
By Eric Francisco
Innovation
6.27.2022 9:28 PM
The 6 best MacBook Pro stands
By Vanessa Spilios
Related Tags
Share: