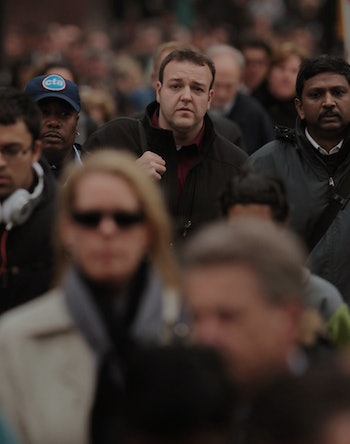 More evidence for the racial biases pervading the United States comes by way of a study showing that white Americans imagine time slowing down when they’re approached by black people.

While the authors of the study, conducted by the American Psychological Association, don’t think their findings mean their study participants were necessarily racist, they do take their data as evidence that white discomfort around black people is a real thing. In this case, that discomfort translated into the temporary alteration of time and motion.

As lead researcher Andreana Kenrick explains in a press release, the common thinking is that a threatened individual would feel like people were approaching more quickly, but this isn’t how her team interpreted their data. Instead, she says, “the anxiety of the experience may cause heightened attention and time expansion where the passage of time seems to slow down, similar to car crash survivors who say the accident seemed to take place in slow motion.”

For their study, published today in the Journal of Experimental Psychology: General, the team recruited 500 white adults of different races online or at a shopping mall in Lawrenceville, New Jersey.

In four of the experiments, participants were shown images of approaching black and white faces and asked to report their level of racial anxiety. People who had high levels of racial anxiety saw black faces moving more slowly than their white counterparts because of, as the authors put it, “time expansion effects.”

Only in one of the five experiments did white Americans with high racial anxiety report that the black person was moving more quickly.

The study has important implications beyond bringing attention to the nation’s racial biases: It calls for more skepticism of eyewitness identification accounts and, as Kenrick says, brings attention to “the misinterpretation of innocent actions by black people as threatening.”

Whether heightened awareness will bring about change, however, remains to be seen.