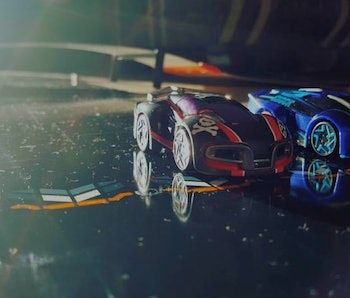 A few years ago, robotics company Anki released its Anki Drive, a cutting-edge game that pit robot racing cars against one another, and with users controlling their vehicles through their smartphones. Anki Drive was perhaps one of the first games to implement features of artificial intelligence into a consumer game of physical cars.

The company has recently released a new successor platform — Anki Overdrive — which features a whole suite of improvements. The most notable is the track: The old Anki Drive game used a large vinyl track that was pretty limited in what kind of tracks gamers could create and race on. Overdrive uses a changeable track built from different pieces. The starter kit allows for eight different designs, and users can buy add-on pieces to create more layouts. There are also more modes of play, newer cars, cross-planform functionality (finally, Android and iOS can play at the same time!), and more.

However, at its core, Anki Overdrive retains the A.I. elements that made its predecessor such a fascinating and exciting game in the first place. Once a race begins, the Anki cars are pretty much autonomous. Human players can control speed and lane positioning through their phones, as well as fire off different weapons like lasers and bombs. But otherwise, the cars stay on track and navigate themselves without interference from humans.

I spoke with Boris Sofman, the CEO and co-founder of Anki, to learn more about Overdrive and how exactly the company was able to move self-driving tech from the pavement outside to the living room floor.

Inverse: What was the origin behind Anki Drive?

Sofman: Our goal is to bring the power of robotics and artificial intelligence — technology that was previously confined to robotics labs and research institutes — into people’s daily lives. Something magical happens when you can deliver an unprecedented level of character personality and interaction to life in a physical product. With Anki Drive, we wanted to create a new way for people to battle race. This cross-section of video games, physical toys, and robotics technology is at the heart of the Drive experience and what sets it apart from any other entertainment product.

We chose a battle-racing game as our first product because it seemed like a good first step for us to introduce this robotics technology to a broader market. The gamer audience spans a wide age range and was a great fit for what we wanted to achieve. The other two co-founders and I are also fans of games, toys, and cars so it really worked out well for us.

Can you describe a bit how it works? How does one go about playing this game?

Simply put, Anki Overdrive is a robotic battle-racing game. But there’s a lot of depth under the hood. Using mobile devices, players take command of these robotic supercars as they go head-to-head with their friends or compete against A.I. controlled commanders in a variety of game modes.

Anki Drive was a great introduction into the robotic battle-racing world but it was limited in the number of tracks that you could race on. We’re proud of what we created but we needed to push the level of customization even further. We had more than 100 prototypes for modular tracks, but they just didn’t feel right. Our prototypes were similar to what you might find in old slot-cars and model trains but that classic experience was too clunky and time-extensive; and once you built it, you never wanted to move it or take it apart. Building a track had to be easy, intuitive and fun; fast to put together, and a cinch to take apart. With only a small number of track pieces, we wanted players to easily build a variety of different courses within seconds; and it had to be easy to set up and put away. It took our engineers and designers multiple iterations to perfect a modular track system.

What ensures the cars stay on track? What’s the technology behind this feature?

The supercars are packed with a 50 mHz computer and a camera that scans — 500 times a second — track pieces that are specially coded so that the cars can recognize their position on the track. We use optics tricks to make it so that the codes embedded in the track are only visible to the cars and are invisible to humans. This data gives the cars information about both their position (which is relayed to the mobile devices running the game) as well as to control its steering through the motors driving their rear wheels. This uses a sophisticated controls algorithm that adjusts the wheel commands 500 times per second to keep extremely accurate precision in their driving trajectories.

Can you go into a bit more detail about how the A.I. systems work? What makes these cars operate autonomously?

Every car’s position is relayed to the mobile device hosting the game. This device acts as the brain behind the real-world collection of cars taking part in the game. Because the position of all cars is known, we effectively can control them as if they were virtual characters in a video game, with the robotics and A.I. keeping the physical positions synchronized to the virtual intentions. Therefore, to make a car A.I.-controlled, we can use the mobile device to “think” for it and decide what actions or behavior it should have to best represent its personality and intentions in the game. In this way, we can have A.I.-controlled cars driving with a depth of personality and intelligence that has never before been possible outside of a video game.

Are there improvements you guys are looking to make to Anki Overdrive? What might these be?

We’re always looking to improve the game. We want our fans to have the best battle-racing experience possible. Being a hardware- and software-driven product, we’re able to continually enhance the game via app updates. We plan to release new game modes and features well after our launch, similar to what we did with Anki Drive. But we’re not ready to let the cat out of the bag on our new gameplay features so you’ll have to wait!

Aside from our internal plans, we have a great community of players and we value their opinion. We try to incorporate their feedback into app updates as well.