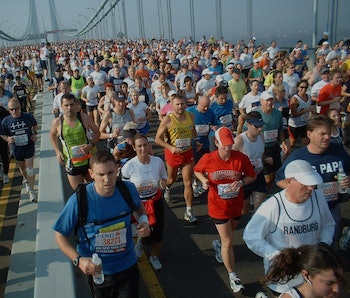 The 2015 New York City Marathon was this past Sunday, and you can be sure at least a few people experienced fatigue, which is pretty much the essence of long distance running. Lactic acid builds up and so does resentment, sapping willpower and energy. Lungs hurt. Muscles tighten. Then all of a sudden, runners find a new burst of energy. This is called “second wind” and it’s as confounding as it is welcome.

Scientists have longer credited second wind to endorphins, the family of opioid hormones that kill pain signals and help us deal with difficult, physically-taxing activities. Endorphins are also responsible for many other kinds of exercise-related euphorias, so it makes sense that they would play a role in second wind. Endorphins are already well-connected to runner’s high — the feelings of elation and well-being that runners experience after a race is over. Most experts who believe endorphins are the cause of second wind think of it and runner’s high as interchangeable phenomena that simply manifest at different times.

But there isn’t scientific consensus on second wind. Many researchers caution against conflating it with runner’s high, after all, one of them is a physiological, not psychological, reaction. The mechanisms must be different since the body is under stress, the mind isn’t experiencing things in the same way. While it’s still unclear what exactly is responsible for this sudden fit of momentum, scientists have a few suspects in mind.

One of them is shifting metabolic activity. Our body stores energy in several different ways. Glycogen is the most readily usable form — the body simply breaks it down into its sugary constituents (a.k.a. glucose) and gets on with life. But in patients with McArdle’s disease, the body cannot readily break down glycogen due to a lack of a necessary enzyme — it has to instead pull energy from alternative stores, like fatty acids or proteins.

Individuals with McArdle’s disease, after exercising for a few minutes, report experiencing very similar symptoms to second wind — presumably because their bodies shift quickly to alternative energy sources. In healthy individuals, this wouldn’t normally happen unless the body has run out of glycogen or needs to tap into multiple energy stores during unusually intense activities, like, say, distance running.

Another theory is tied to lactic acid production. As evolved organisms, our bodies use oxygen to breakdown energy sources and function normally. But we also retain an old evolutionary mechanism for producing energy during times of heavy physical activity, sans oxygen. This “anaerobic metabolism” provides a short boost in energy, but creates a lactic acid byproduct. If the body doesn’t rest or if higher oxygen demands aren’t met soon enough, lactic acid could build up and cause muscle cell damage as a result of inflammation.

What does this have to do with second wind? The thinking goes that eventually, during a distance race, the body has acclimated well enough to current conditions that it starts to use oxygen more efficiently, eliminating the need to rely on anaerobic respiration as an energy source. Second wind is the “flush of relief” when your muscles finally get the oxygen they need. Increased oxygen utilization combined with a decrease in lactic acid production creates euphoria in the middle of the race, and could be what we call second wind. Under this theory, a more seasoned athlete who runs professionally would be much less likely to experience second wind, since their bodies are better trained to utilize oxygen more effectively. They’ve got the wind all along.

Lastly, second wind could actually just be an entirely psychological phenomenon. Your body might actually just be responding to a suddenly profound sense of confidence or willpower. You just become The Little Engine that Could and subsequently can.

The mystery of second wind is certainly not at the top of most medical researchers’ priority lists. Nevertheless, finding out specifically how it works would be a tremendous asset to the sports industry. If there is a physiological mechanism by which second wind could be artificially induced, it could change the way many individuals undertake distance running or endurance sports. The closest thing we have right now is a quick dose of painkillers or a booster shot of adrenaline. There’s definitely a market out there for harnessing second wind as a performance-enhancing drug — it’s just a matter of time to see who can bottle it first.

More like this
Mind and Body
5.7.2022 12:00 PM
Barbell exercises might not work for everyone – here’s what to do instead
By David Rogerson and The Conversation
Entertainment
5.12.2022 10:00 AM
How Watchmen uses time travel to explore the sinister cycles of racism
By Chrishaun Baker
Culture
5.17.2022 8:30 AM
The 10 best Black Mirror episodes ever, ranked
By Robin Bea
Related Tags
Share: