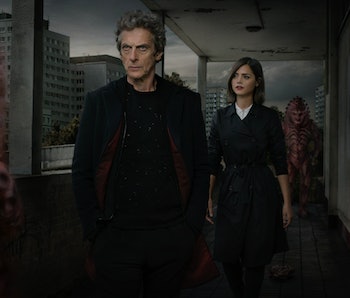 Immigrant assimilation, domestic terrorism, radical insurgency, political coups, drone warfare, and even a dose of Constructivist vs. Realist political theory debate to boot? While we are accustomed to Doctor Who tackling broad philosophical dilemmas, in “The Zygon Invasion,” writer Peter Harness takes the Doctor into a place it rarely goes: political commentary on contemporary events.

In “The Day of the Doctor,” the Zygons — a race of tentacle-covered shape-shifting aliens — sign a peace treaty with Earth after an invasion attempt. As we learn in the cold open of “The Zygon Invasion”, the treaty allowed 40 million Zygons to stay on Earth, on the condition that they assimilate into humanity by remaining in human form. A group of younger, radical Zygons rebel, claiming that forced assimilation is, in effect, a violation of their rights.

The “Truth or Consequences” rebel group has infiltrated Great Britain, creating a series of underground networks and splinter cells. Their first step is a highly visible political coup, assassinating “moderate” Zygon leaders in a series of propaganda videos published on the internet. For the rebel Zygons, these “moderate sellouts” are the biggest traitors of all. Acts of domestic terrorism soon follow: the humans that force their assimilation must pay.

While the episode never explicitly connects the Zygon invasion to modern splinter groups, it doesn’t have to: Replace “Truth or Consequences” with “ISIS,” and “human” with “western” and you see the parallels are obvious.

The battleground is assimilation. For their part, the “moderate” Zygons’ push to assimilate to humanity parallels the expectation for Muslims in western countries to assimilate culturally. Certainly there is some sense to “doing as the Romans do,” but in our post-9/11 paranoia, that cultural integration is often a defense mechanism. To integrate as seamlessly and quickly as possible is to be seen as non-threatening.

North America, Australia, and Europe are all honing their particular brands of this mutual fear. From the boycotting of mosques in states like Arizona, to the banning of the burqa in France, Islam as a whole gets blamed for the actions of a small group of insurgents, and the consequences fall upon regular folks.

We also find an ideological conflict between the Doctor and Kate Stewart, the head of U.N.I.T. (the Whovian universe’s British paramilitary intelligence service), mirroring real-world political debate. The Doctor pleads for peace negotiation: The rebellion isn’t the Zygon population at large, but rather a radical faction. And after all, he says, nothing radicalizes a population like state violence towards the many to get to the few.

With the treaty broken, and Zygons responsible for terroristic acts that lead to human deaths, Stewart demands action. She calls for bombings and drone strikes on known Zygon targets, knowing well that tens of thousands of innocent aliens could be hurt. In a telling moment at the beginning of the episode, after the Doctor finally convinces Stewart to hold off on drone strikes, he tells Clara to protect her country from “ …the scary monsters … and also the Zygons.” This is the show alluding less than subtly to debates over military actions in Afghanistan and Libya.

It will be interesting to see how this conflict is remedied in next week’s second and final episode of the current story arc. Will the Zygons be eliminated or allowed to stay on Earth? Will they be forced to continue race-wide assimilation? Within the fictional confines of the Whoverse, the Doctor is the peacenik problem solver unafraid to get his hands dirty. The out here, though, is not so clear. Even on a show like Dr. Who, on which alien invasions of Earth are a [regular holiday tradition](http://tardis.wikia.com/wiki/TheChristmas_Invasion(TV_story), giant bipedal octopi chilling in London coffee shops seems like a fairly implausible plot line. It remains to be seen whether we can, in fact, all live in harmony.