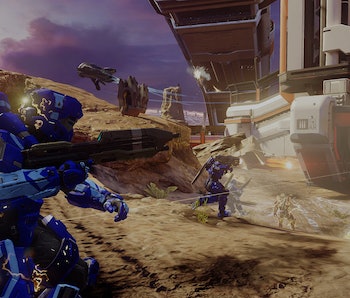 Halo as a series has always been known for their multiplayer mode, revolutionizing the way online games were played when Halo 2 was released on the original Xbox back in 2004. But as Bungie moved on to other projects, 343 Industries took the reins. Their first installment, Halo 4 was met with a mixed reception by competitive and casual fans alike when it introduced things like armor abilities and customized loadouts — and many debated whether or not Halo could make a comeback in competitive gaming while under 343’s wing.

The next installment, Halo 5: Guardians was just released this past Tuesday on Xbox One. While the campaign is certainly an interesting twist for the series that incorporates a new cast of characters, the multiplayer is really where the game shines; especially since it brought back everything that made Halo feel different competitively from other titles like Call of Duty and Battlefield.

Some of these changes reflect in the base gameplay the second you hop in, including the addition of booster and sprinting for every player, but the game’s new multiplayer mode Warzone is one of the most refreshing additions the series has ever seen.

Certainly, it’s similar to many multiplayer modes that have been done before like Titanfall’s attrition mode or Battlefield’s conquest mode – but the key difference is how it combines the way points are earned that makes it so interesting.

Each map of Warzone has three bases that can be captured across the map, which are the main objectives of the game. If players take a base, it will feed points continuously to their team. If they manage to take all three? They can push the opposite team’s base to destroy their core for an instant victory, which encourages everyone to actively fight for control over these bases resulting in more movement around the map.

On top of the base captures, Warzone will also spawn various bosses and enemies across the map with different difficulties. These bosses and enemies are worth just as many points, depending on their significance, and take a few players to destroy. It sounds like a simple mechanic, but boss kills can instantly change the tide of a battle depending on how teams coordinate – which is something you don’t see often in games these days.

Warzone has a REQ system too, which allows players to use earned points (from player kills, point captures, etc.) to purchase various vehicles and weapons throughout the match. These are earned from packs you can purchase with REQ points (earned from multiplayer) or real cash that drops a set of cards varying in quality. Essentially this addition prevents players from dominating each other with power vehicles such as tanks early in the game, although this does happen on occasion.

During my time with Halo 5’s multiplayer, almost every Warzone battle ended with both teams a few points away from the 1k cap thanks to these new systems, which kept matches interesting and players engaged despite being a few points behind. You will also witness interesting moments within this new playground; like when players stop fighting each other in favor of teaming up against a difficult boss worth a ton of points.

That being said, there are a few issues within Warzone that need to be addressed. One of the biggest is the boss known as Warden Eternal, who shows up towards the end of each match. The Warden is worth a ton of points and thus is a key factor to victory whenever he spawns in as a boss. This encourages players to spawn in as many power weapons and vehicles as they can to take him out — with the last one to fire before he dies getting the points. So essentially, you could have a team who takes his health down to 1%, only to have an enemy player hit him once with a rock to kill him and gain the points. Frustrating, isn’t it?

This happens with many of the larger, more difficult bosses in Warzone too, which are basically bullet sponges that feature no unique mechanics.

Even with these small quirks, Warzone brings plenty to the table as a new addition to the Halo franchise. Each map is engaging for players and well-designed for balance, featuring numerous bosses to take down despite their lack of unique mechanics, and plenty of fun toys for players to use through the new REQ system.

Halo games have always had an evolving competitive multiplayer environment, and it’s going to be interesting to see how 343 evolves Warzone in Halo 5, but even if you aren’t a fan of the mode there’s the classic arena for you to dive into.