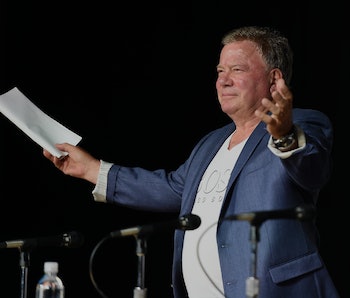 Shatner was impressed. No, wait. What’s the opposite of impressed. The other thing. Oh, right: not impressed. Check out these fighting words:

Or him dragging Battlestar Galactica into the fray:

Shatner, oblivious to homage, pointed out the similarities of The Force Awakens to the 1970s British sci-fi series Space: 1999:

He even took a jab at Carrie Fisher’s height:

And her lack of back-end salary:

Though Shatner was quick to point out that he wasn’t criticizing — even though he was totally, definitely, unmistakably doing just that:

He most recently left followers with this cold blooded retort:

The friendly feud and propensity to publicly hate on Star Wars probably began when Abrams took over directing duties on the 2009 big-screen reboot of Star Trek. Abrams reportedly approached Shatner to film a cameo as Captain Kirk alongside his longtime Enterprise companion Leonard Nimoy as Mr. Spock, but Shatner apparently declined because he wanted a bigger role. Shatner will reportedly have a cameo in the third new Star Trek movie, which Abrams isn’t directing.

As you can see in that 2008 video, Shatner dismissed the reports that he was approached for a cameo in the reboot, responding to a version of events Abrams told to AMC. Both exchange pleasantries as a passive-aggressive undercurrent cuts through the whole thing. Shatner, the suave TV icon of 50 years ago, and seems to be settling in as the cranky octogenarian grandfather who casually dismisses what will most likely be the biggest movie of all time. He still goes where no one has gone before.