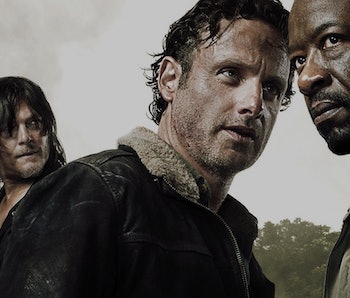 It’s worth keeping this in mind as The Walking Dead fumbles its way through last week’s major character death. To be sure, the AMC zombie show is handling it especially poorly, with its showrunner immediately coming out to announce that maybe the character wasn’t dead after all, in some way. This mealy-mouthed attempt to assuage fans without commitment does nobody any good.

But to be fair to The Walking Dead, almost no serialized stories have lasted as long as it has without breaking its death rules. In the era of television serialization — the last 20 years or so — almost no high-profile series has manage to make it six or more seasons, maintain critical and ratings momentum, and kill off characters. It just doesn’t happen.

At this point, a series usually has a set end-point. The Sopranos was done after a two-part sixth season, as was Mad Men. Breaking Bad had a two-part fifth season, while Battlestar Galactica planned to end in its fourth season, The Wire its fifth, Lost sixth, and Buffy the Vampire Slayer both a fifth and a seventh. It’s a lot easier to kill off major characters when you know the show is right behind them — they receive a thematic send-off that aligns with the show’s send-off.

But The Walking Dead is different. It’s in its sixth season, still hyper-popular, and with no set end date. Game of Thrones, itself dealing with a major character death controversy, is also exploring new ground — it’s going to last at least to a seventh season, and if I were putting money on it, even longer than that, possibly via a two-part final season or just regular renewal. These are a new form of television show: extremely popular, critically acclaimed, and focused on multiple characters and serialized at a level rarely seen before. Both TWD and GoT have also built their reputations on a feeling that anyone can die at any time, so they have to try to keep shocking viewers.

The problem spot for most shows seems to be after the third season. The last core character The Walking Dead killed was in its third season. Game of Thrones, of course, got famous for killing its hero in its first season, then doing it again in the third. But in the fifth? That was a bridge too far. Joss Whedon is famous for filling graves with his characters. But with very few exceptions, these deaths took place either early on in the series, at the end of a run, or were tremendously controversial. There are fans of Tara and Cordelia, for example, who consider their deaths to be the points at which their respective shows turned irredeemable. Buffy never recovered after Tara’s death, while Angel did - after it brought Cordelia back for a proper goodbye in arguably its best episode.

The pattern seems relatively consistent: an acclaimed TV show that kills off a fan favorite character after the third season. It either falls apart (The Good Wife’s major character death in Season 5 isn’t usually considered what made it bad, but its sixth season was widely considered a disappointment) or it brings the character back (The Vampire Diaries’ brief moment as the most surprisingly great show on TV ended with its third season and the death of fan-favorite Alaric Saltzman. After two significantly weaker seasons, Ric was brought back in the sixth, and the show was suddenly good again.)

This isn’t just limited to TV shows either. A Song of Ice and Fire, the novels that gave rise to Game of Thrones, were obviously just as brutal as the show initially. But by the fourth and fifth novels, it seems like almost every popular character who seems to die either does so on a cliffhanger, or is given a way out.

Perhaps the best comparison is comic books, where long-running series have always struggled with popular character deaths. Marvel killed Captain America (Steve Rogers) in the mid-2000s, only to bring him back within three years. They even had a “dead is dead” policy at the start of the decade (which is what Game of Thrones executives have falsely said about that story). But when Joss Whedon wants Colossus for Astonishing X-Men, “dead” suddenly ain’t so dead anymore. In fact, arguably the most important long-running series to avoid these gimmicks is The Walking Dead comics, although their critical acclaim has largely faded as their nihilistic melodrama repeats itself.

The issue, then, is not whether The Walking Dead killed off a core character well or not, but whether it’s even possible for a series like The Walking Dead to succeed in a popular character’s death. Serialization helped make this show the highest-rated on television — but now the cliffhanger and character death demon has come to collect its due. It seems that this is the turning point where TWD will either go back on its apparent brutality and keep a fan favorite alive, or it will enter a terminal decline.