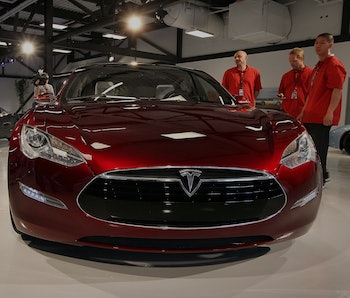 A driver on Highway 99 north of Seattle claims his Tesla Autopilot feature saved him from hitting another vehicle at 45 mph.

Recorded by his dashcam and uploaded to YouTube (there’s no sound, so don’t bother adjusting your volume), the driver — who explained he uses his Tesla for his job as an Uber driver — appears to be cruising along until the car comes to an abrupt stop to prevent a crash.

“Did you have any time to react and was [Autopilot] just faster?,” asked one commenter.

“I wasn’t even able to honk the horn before the car came to a stop. The autopilot saved my butt!” the driver replied.

Tesla’s Autopilot feature debuted earlier this month and has been received to mixed reviews — mostly by people who expected it to offer a hands-free driving experience.

One driver uploaded a video that apparently shows the car attempting to veer into oncoming traffic. (“Tesla autopilot tried to kill me!” is its title).

The car company has repeatedly said drivers must keep their hands on the wheel — something drivers have ignored in their attempts to push the feature to the limit.