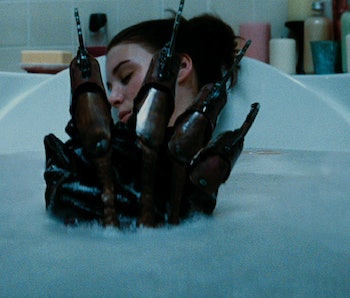 Movies may be a visual medium, but the best scary flicks will cut right through the hand you instinctually put over your eyes. It could be a music swell or a small sound effect or a single spoken word, and with that, you get the creeps.

We’re fans of movies here at Inverse, and we could name our fair share of sound effects that spook us out. But we also enlisted Jake Zavracky, a longtime composer for films and television, for some insight. Here are some movie sounds that frighten us the most.

10. The T.Rex roar from Jurassic Park

Steven Spielberg’s classic still fascinates viewers 22 years after its release. Hell, a deep-seated nostalgia for dino-scares is what pushed this year’s Jurassic World to a nearly $2 billion worldwide haul. But it all started with the original, and its uncanny ability to scare us with creatures that haven’t walked the earth in eons. Part of that terror lies in the impeccable sound design. Zavracky says it’s because of the high-pitched squeals. “The roar has a human element to it, and it’s an angry sound,” he says. “It’s a higher-pitched sound than you would expect a creature of that size to make, which makes it somehow more effective — for some reason a giant creature making a high-pitched noise is usually scarier than a low-pitched sound would be.”

To get the effect, sound designer Gary Rydstrom made a composite of tiger, alligator, and baby elephant sounds to bring the 9-ton beast to life. For his services in scaring the shit out of audiences, Rydstrom won two Academy Awards for the film for Best Sound and Best Sound Effects Editing.

9. The motion tracker in Aliens

While the atmospherics of Ridley Scott’s 1979 original qualified it as a horror film (Dallas getting killed by the xenomorph is still one of the best jump scares in movie history), James Cameron’s 1986 sequel was more of a futuristic war movie. Cameron emphasized action yet delivered some real terror. The simple sound effect of the motion tracker beep was also in Scott’s original, as seen in the Dallas clip above, but Cameron let its slow and steady pulse signal the characters’ impending doom. “It has a similar effect to a teapot coming to a boil,” Zavracky told me. “It feels like an upsurge in energy, like something is about to explode, and it’s most likely a synth with some white noise mixed in, although it does have a nice organic sound to it.”

Audio of the sound effect can be heard here. You can feel your pulse speed up as the pings accelerate.

8. The tripod horn in War of the Worlds

Sensing a Spielberg trend here? At least you know the guy earned his billions with talent. His 2005 film adaptation of H.G. Wells’ War of the Worlds was a box office success, even as critical response was muted. Many went in hoping for another splashy alien spectacle. What they got was a sobering, post-9/11 story about dealing with hysteria and the potential for total annihilation.

Sound designer Michael Babcock created the terrifying sound of the alien tripod’s deafening horn as if to announce your gruesome death by mixing together sounds of a didgeridoo and a djembe drum for a deep bass. “It sounds like a warning,” Zavracky said, “and it compliments the other-worldliness of alien spacecraft. The idea that it is a warning is almost scarier than it would be if the aliens just killed you without warning, because it lets you know death is near and you will live the rest of your short life in terror.”

7. Freddy Krueger’s scraping claws in A Nightmare on Elm Street

There’s a reason nails on a chalkboard is a persistent cliche — it’s a gawdawful sound. The late great horror maestro Wes Craven knew this, and used it and a bevy of other terrifying elements when creating the villain in A Nightmare on Elm Street. Craven drew on his fear of cats and a memory of creepy late-night commercials for knives to imagine Freddy’s iconic glove.

The practical sparking glove effect was created by attaching the prop to a car battery and running it across metal. The end sound effect of the glove itself was created by scratching the bottom of a metal chair using a steak knife. It’s giving us the willies just thinking about it.

6. The chainsaw from The Texas Chainsaw Massacre

The fact that director Tobe Hooper used Ed Gein, one of the most notorious serial killers in history, as the basis for Leatherface in The Texas Chainsaw Massacre, means you’re in for a terrifying time. Like Halloween, The Texas Chainsaw Massacre was such a major influence on the horror genre that it spawned its own series of knockoffs, remakes, and homages. It should also be noted that its tagline, “Who will survive and what will be left of them?”, is probably one of the most deviously perfect in horror history.

The titular chainsaw Leatherface used is a raw, visceral machine in real life, terrifying for its compact violence and for its almost vocal range of sounds, from an idle to a yowl. “A chainsaw is not a very pleasant thing to listen to in the first place, and it doesn’t take much of a leap in the imagination to picture it cutting our limbs off,” Zavracky explained. “The sound of a chainsaw is automatically unsettling; add to that the idea of a maniac in a skin mask chasing you with one.” Yep, we’re sufficiently freaked out.

5. The Cattle Gun from No Country for Old Men

Javier Bardem’s idiosyncratic performance as Anton Chigurh in No Country for Old Men brings a note of horror to the Coen Bros’ Academy Award-winning thriller. Even with that Prince Valiant hairdo, he’s the personification of chaos and evil, lugging as his preferred murder implement a cattle gun or a captive bolt pistol. It’s unconventional: The guns are primarily used in slaughterhouses to stun cattle, goats, and sheep, using compressed air to discharge a heavy stainless steel rod into the head of the animal before recoiling into the short handheld barrel.

“There’s kind of like a liquid-y splat to this sound that is disturbing to the ear; we picture our brains splattering,” Zavracky said. “Anything happening to our skull or our brains is definitely one of the things we fear the most, which is what makes that short sound so effective.” The gentle hiss of the compressed air and the squishy kerplunk of the rod makes it all memorably disgusting.

The sounds of the greatest hunter in the universe were inspired by a horseshoe crab. Veteran voice actor Peter Cullen (whom you may know as the voice of Optimus Prime) agreed to work on the movie in an uncredited role and gave the Predator his signature gurgling and click sounds. He based the disconcerting clicks, which announce the Predator’s potential whereabouts through thick jungle scenes, on the sound of a dying horseshoe crab. That innocent inspiration somehow makes the noises even creepier. Which makes sense, Zavracky told me: “We’re repelled by large insects, so it’s only natural that the sound of a giant insect would be terrifying.”

If you haven’t seen last year’s Australian horror gem The Babadook, do yourself a favor and Netflix that sucker. It’s a cerebral, twisted fairy tale story of a single mother who finds a mysterious book touting a clingy demon that will latch on to her son. It’s some of the richest horror in years, and Zavracky says, “It also has a lot of great sound design throughout.” The voice of the demon, named Mister Babadook, is an unforgettably dark vocalization. “The first two syllables sound very animal, un-human, and the three dook sounds are like someone speechifying sucking in air, which is always an unsettling thing to hear,” Zavracky said. “Anybody can do this, of course, but it hurts and it’s also very unpleasant to listen to.” Think of it like vocal nails on a chalkboard.

2. The monster behind Winkie’s in Mulholland Dr.

David Lynch’s sound design has always included an unnerving sense of serenity, but nowhere has his mix of sound design and imagery been more terrifying in a single moment than this scene in his dreamlike film Mulholland Drive. The scene is a masterclass in building tension, but I’ll let Zavracky take it from here: “David Lynch is one of the masters of disturbing sound design — he can make any scene seem otherwordly, dark, foreboding; even in the sunny atmosphere of a diner’s parking lot. As the two characters approach the dumpster behind the diner we hear a low hum caked in infinite reverb, a Lynch staple starting with Eraserhead and in basically every movie he made after that. There’s some sort of tape-reversed low-end pulse in there as well, and also what sounds like it might be a gong being hit very lightly with a mallet. When the mysterious filthy man emerges from behind the dumpster there’s a sudden burst of noise, followed by an increase in the hum’s intensity. It’s a classic scene.” It also makes you never want to walk around a parking lot in Los Angeles.

The ultimate scary sound for the ultimate villain. The genius of this effect is that Vader’s breathing punctuates his speech, and that in itself can mean a whole range of emotions from the dark lord of the Sith. While it’s not as outright terrifying as other effects, it’s conveys Vader’s essence as a half man / half machine. “The claustrophobic sound of the breathing with no ambience, combined with the clicks at the end of the breath have a sub-human vibe,” Zavracky said. “Then combined with the breathing being slowed down also adds to its un-human-ness.”

But that un-human sound was from a very human activity. Sound design legend Ben Burtt, whom Zavracky called “one of the best of all time in the industry,” created the breath by putting a microphone against a regulator inside a scuba tank. Try to control any panic you may feel.

More like this
Entertainment
4 hours ago
My Animal is an Intoxicating Werewolf Romance With a Queer Bite
By Isaac Feldberg
Entertainment
Feb. 3, 2023
Knock at the Cabin's Ending is Shyamalan's Most Surprising Twist Yet
By Eric Francisco
Entertainment
Jan. 30, 2023
The Boogeyman Trailer Delivers a New Take on Stephen King's Monster Under the Bed
By Dais Johnston
LEARN SOMETHING NEW EVERY DAY.
Related Tags
Share: