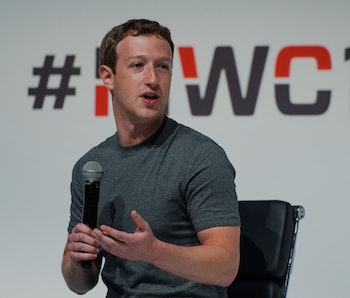 Facebook wants to give free internet access to millions of people who couldn’t otherwise afford it in India. If that sounds too good to be true, it’s because it is.

Internet advocates in India are protesting Facebook’s Internet.org program, which exempts users from data charges when they access a stripped-down version of Facebook and a select few other websites. The service launched in February.

Mark Zuckerberg was in India defending the program this week.

The brilliance of Zuckerberg’s plan is that, on the face of it, it sounds like a truly noble cause — connect folks to the internet who otherwise wouldn’t or couldn’t.

But despite cleverly calling the scheme Internet.org, what Zuckerberg is offering is not free access to the Internet — it’s access to Facebook, Facebook Messenger, and a couple dozen hand-picked websites for news and information.

So what, you ask? For a poor person living in India, wouldn’t access to some internet be better than none? And if they want to surf Facebook for free, who are we from our position of privilege in North America to deny it to them?

You know that saying about there being no such thing as a free lunch? That applies here.

See, the free internet on offer is not really free. It’s only available with one cellphone provider in India, Reliance Wireless. One cellphone shop owner told the New York Times that the service provider’s connection is “very patchy” and “I would really have to sell the customer on it.”

So if Internet.org is a thing that Indian consumers value, there’s nothing stopping Reliance from capturing that value by charging more for paid services, or offering worse service for the same price.

Someone else is paying for the service, and that’s Facebook. The media giant has a deal with Reliance to cover the costs of the “free” bandwidth offered to consumers. How much? They’re not saying.

This points to the bigger, more insidious problem with what Facebook is doing. It has to do with the idea of net neutrality, which is the principle that internet service providers must provide equal access to everything on the internet, without favoring some sites over others.

If you’re unfamiliar with why people care about this, watch these hilarious and smart young tech guys from India explain:

When big companies can buy access to your eyeballs, it stifles democracy and innovation on the internet — the kind of innovation, ironically, that launched internet giants like Facebook in the first place.

Zuckerberg argues that Internet.org does not violate the principles of net neutrality, it’s simply about expanding internet penetration and access.

According to the New York Times, the Indian government has heard the concerns of the activists and is considering regulations to govern Internet.org and other similar free basic internet services.