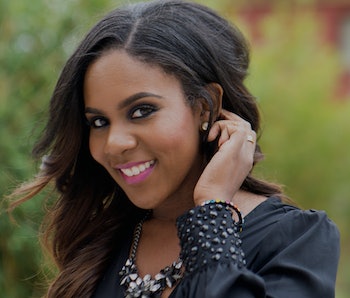 Careers rarely go according to plan. In Job Hacks, we shake down experts for the insights they cultivated on the way to the top of their field.

Job: CEO of Superstar Nail Lacquer, StyleShoppe.com, motivational speaker, author of How To Build Your Blogging Business In A Week, entrepreneur. Check out her website for more.

How did you become a CEO and motivational speaker at such a young age?

I’ve been an entrepreneur since the age of 13 or 14. I wrote my first book with my mom when I was around 13. My mom was an entrepreneur, my grandfather was an entrepreneur — so I had the spirit of entrepreneurship in me, I just didn’t own it yet. I was talking about how I wanted to change the world when I grow up, and my grandfather said a great way to do that is to help people live their dreams and build their businesses. So when I was about 16 or 17, I started the Billionaire Girls Club. That was all around the country and it was like a sorority. They could learn about etiquette, they could learn about how to interact with their teachers, how to interact with their parents. That was my very first business.

It taught me how to make money, how to sell, how to buy. And then when I turned 18, I said I want something that’s more mature; I want my name to be on something. That’s when I started Superstar Nail Lacquer. I started it freshman year at Michigan State University. My mom used to be in cosmetics, so we knew how to get the chemicals and things like that, but I didn’t know how to market in a nail polish world. There are these huge brands that people buy every day — why are people going to stop using them to try mine? That’s where the hard part came in.

So how did you solve that dilemma — how did you get people to give you a chance over larger and more famous brands?

I said, “What can make mine different from everyone else?” That’s when I thought of a fast-drying and environmentally friendly formula. We were actually one of the first to start the fast-drying trend with nail polish and make it environmentally friendly. Those chemicals are hard to mix together, because there are different formulas that have to be in your nail polish to make it stay, make it stick, and make it quality. We found out how to do it. Then I said “OK, that’s our formula. But what else will make ours different?”

I’m guessing that’s where the “superstar” part came in?

I came up with the name Superstar Nail Lacquer because I was able to walk the red carpet, I was going to Diddy’s events. I was doing conferences for young entrepreneurs, and that afforded me the opportunity to be around a lot of great people. So I said, “I want to be able to share this experience with other young people.” Because not everyone will be able to walk into a celebrity’s home or walk the red carpet. If I could incorporate this into my nail polish brand, maybe I could give them a taste of that world. That’s where the name Superstar Nail Lacquer came from. I decided to name every color after something that had to do with being a celebrity. Some of our colors are Walk the Red Carpet, It Girl Orange, Rising Star Razzberry. That’s what made ours different from everyone else — because we were selling a culture, not just a nail polish.

How were you able to have the opportunity to go to these red carpet events?

It was because my mother and myself were business coaches. So before I had the nail polish company, I was doing teen conferences for young entrepreneurs. We still do conferences every summer in Orlando, Florida. At that time I was a teenager, and thousands of teenagers would come to learn about business. It got so big that principles and different people around the city were bringing their kids to our conference to learn. We would bring in celebrities, we would bring in Tyler James Williams from Everybody Hates Chris, we had Quincy Combs, we had football players. That’s really how it started — by bringing in these people to show them they could be successful at a young age.

When you gave these talks, did you find it was difficult to get people to take you seriously because of your age?

When we first started the conferences, of course people were like, “OK, what does this girl have to talk about?” I had to let them know by giving them examples. And that’s something I found tends to work. When I was able to pull up the facts or say I wrote this book at 13, you can do it too, here’s how, then they start to listen. Even to this day whenever I go speak to young people or adults, I always give an example of what I’ve done. That way, it catches their attention and they say, “I can do it too.”

One of the hardships I had running a business at 18 — the nail polish company — was meeting with people who were two or three times my age. I would meet with them, and at first they didn’t know my face because I don’t have a lot of pictures of me on Superstar Nail Lacquer, it’s just about the polish. So when I would come into a room they would be shocked and say, “Oh, you’re the owner of this company?” They would try to test me, ask me hard questions, trip me up because they didn’t think I knew what I was doing. So I had to combat that by going into those meetings knowing twice as much as they did. Knowing what to do, having the questions already answered, coming prepared, being ready for the meeting — that’s how I got over being so young.

Is that the advice you would give to young people who want to succeed in professional spheres where their peers are two or three times their age?

Be prepared and know your industry. Because it’s true — the younger you are, most of the time you usually don’t know as much as a person who is older than you are. When you are succeeding at a young age, you have to be two or three steps ahead of everyone else because they will say, “We don’t know if you can handle this” or that you’re too young or irresponsible. You have to prove to them that you know what you’re talking about. And that comes through going to the bookstore, finding out your industry, going to workshops. You have to learn more about your craft and stay on top of it.

What’s the biggest learning curve to having your own business when you’re 18 to 25?

Learning how to interact with adults who have been in the industry for a long time and earn their trust. The other thing is learning how to continuously market the same thing for years. That’s what a lot of entrepreneurs struggle with. I had to market for Superstar Nail Lacquer every single day in a new way, and it’s been over five years. When it’s new, your family is buying it, your friends are buying it, people are excited about it. But after they buy it, you have to keep coming up with new ideas and new strategies.

And I know you give talks on how to use social media. How did you learn to excel at it, workshops and classes? Or through trial and error?

It was really just trial and error. I mean, I built Superstar Nail Lacquer honestly through Twitter. I didn’t have a large marketing budget when I started. I couldn’t afford to be in the major magazines like these other nail polishes. I didn’t have money to be on a billboard. All the money we were getting was going right back into the business. Twitter was big at that time — it still is, but there was no Instagram then. And there was no limit to who I could talk to. There are thousands of people following me — why don’t I talk about my brand? So that’s what I started to do. I was sending out samples and then people began to catch on.

What’s the most common mistake people make when trying to market themselves on social media?

With so many people using social media, they think they can post about their business once a day and it will blow up or go viral. You hear stories about people going viral in one day—and that’s great, but usually there’s backstory behind it. It takes time. People get disappointed when that doesn’t happen for them, but they’re looking at others who have been in business for years.

You’ve been very fortunate to have a mother who has background in your field and a willingness to show you the ropes. What would you say to other aspiring entrepreneurs who might not be as fortunate?

There are a few things they need as a foundation: read, read, read. Successful people leave clues. That’s something my parents taught me. There are secrets in books. Go right to any bookstore and get a business book. Next, find a mentor. Some people don’t grow up with people they want mentoring them, but there are programs for that – my mom and I mentor young entrepreneurs. Always gather inspiration from those around you.