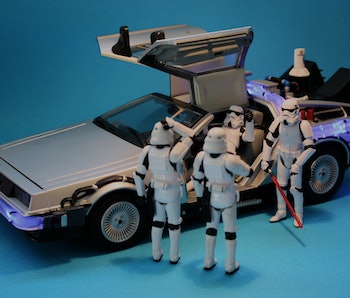 This afternoon, The New York Times Magazine decided to tweet out the survey results to a very important, lingering question: “If you could go back and kill Hitler as a baby, would you do it?” You won’t believe what happens next.

Before you see the reactions, here’s a photo of Baby Hitler to give you an idea of what you’d be up against as a time traveler.

In fact, many were perplexed as to why it has to be a baby Adolf Hitler.

Of course, those people seem to be ignoring The Times’ moral contradiction: A baby is innocent, but he can become an evil adult. Should you prevent that future? Like, duh, of course you stop Hitler. But could you off Lil’ Adolf?

Others took the question less seriously. Some even just flung parodies right back at The Times:

Then there are the folks who just question all this time travel business in general. Inverse’s own Kashann Kilson has wondered if maybe tinkering with the timeline actually prevents you from going back to kill Baby Hitler. Other Tweeters had their own paradoxical takes:

Lastly, there was the “let’s find a better solution” crowd. They thought pretty hard about this:

Jeb Lund figured out what The Times was really getting at with its incendiary question:

But as usual things didn’t get much realer than Desus.

More like this
Innovation
Jan. 19, 2023
A robot choreographer reveals why M3GAN — and all robots — should dance
By Molly Glick
Culture
21 hours ago
Final Destination 2 Perfected the Art of the Gross-Out Kill
By Jon O'Brien
Culture
19 hours ago
Lost Jumped the Shark by Breaking Its Most Important Rule
By Jake Kleinman
LEARN SOMETHING NEW EVERY DAY.
Related Tags
Share: