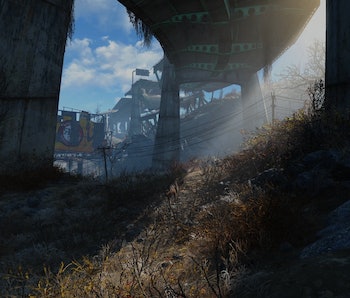 With the release of the next-generation consoles a couple years behind us now, the video games released on both the PlayStation 4 and Xbox One are starting to catch up to the hype originally set by their marketing standards.

Pitched back in 2013 as entertainment machines capable of a resolution of 1080p and a frame rate of 60 FPS, it’s no surprise that people were excited to get their hands on both consoles to see what they could do in the living room. And yet here we are, two years later — with mainstream games working hard to reach 1080p resolutions at half the frame rate they intended. (For instance, today’s launch of Halo 5 touts this experience).

But hey, that’s not a bad thing at all — because beautiful graphics aren’t the only thing that matter in video games; it’s about the experience the game provides through gameplay as well as graphics, and that’s something that far less people seem concerned about this console generation.

Certainly, I’d love to see Fallout 4 running at 1080p, 60 frames per second on my Xbox this fall as much as the next guy, but that isn’t what it’s all about.

In order for Fallout 4 to be successful, the characters have to be fleshed out and interesting, the environments have to be believable and detailed. Most importantly, the gameplay has to be smooth and compelling, and that includes having a steady frame rate.

There’s nothing more frustrating than a choppy frame rate that consistently reduces your gameplay experience down to a series of pictures in a slideshow — and unfortunately that’s the battle most developers are facing with these next-generation titles when working to meet consumer expectations.

Take Assassin’s Creed: Unity, for example, which struggled across the board to keep the frame rate steady during its gameplay experience in crowded areas. Set to be Ubisoft’s first installment of the new console generation, AC: Unity fell short in many performance departments — all because they wanted to push the visuals and scale of the city for the sake of being beautiful.

The developers kept working on the game past the launch date, trying to fix the various bugs and frame rate issues, and delivering patches left and right. But they eventually apologized about their product and offered free downloadable content to all who owned Unity, promising to do better next time around.

And while they did do better by Assassin’s Creed Syndicate this year, many consumers remained skeptical about its performance up until they could watch the brave souls who purchased the game. Syndicate features a great cast of characters and it achieves what Unity couldn’t — a steady frame rate of 30 at resolution of 1080p, which presents a much smoother gameplay experience for the player.

Focusing on quality can sometimes end up a technical success too, as was the case with The Order: 1886 this past February, which focused heavily on cinematic viewpoints and gorgeous characters. The game looked great and ran well, maintaining a steady frame rate all the way through at 30 frames. But the game fell short in many areas because so much time was put into the visuals.

Sure, it was gorgeous, but it played like a mediocre cover-based shooter that we’d all seen years ago with Gears of War and failed to explore its world and characters the way many had hoped. This resulted in a bland and short (eight hour) storyline packed into a $60.00 game — which left many craving more.

There have been plenty of examples in the past few years that follow the same story as AC: Unity too, focusing too much on being graphically compelling instead of providing a smooth gameplay experience to the players. That’s unfortunate, especially considering that they contain such great stories and content. Many people wanted to experience what Unity had to offer, but didn’t want to put up with the broken game that was delivered to them upon launch.

In the gaming industry, visuals obviously do matter - not in all cases, but they always have an impact on the overall package. But it’s important to realize that gameplay can be affected by this as well, which typically provides a choppier gameplay experience with a series of issues some gamers can’t ignore.

Frames are just as important as pretty pictures in 1080p and sometimes we can’t have both — but there’s nothing wrong with a little resolution sacrifice to keep our frame rate steady and our gameplay experiences smooth.

More like this
Gaming
Dec. 1, 2022
11 new titles coming to Xbox Game Pass in December 2022
By Robin Bea
Gaming
Dec. 5, 2022
15 years ago, the creator of Final Fantasy made his masterpiece
By Willa Rowe
Gaming
November 30, 2022
Bethesda’s next epic RPG Starfield is more than Fallout in space
By Joseph Yaden, Mike Bloom and Willa Rowe
Related Tags
Share: