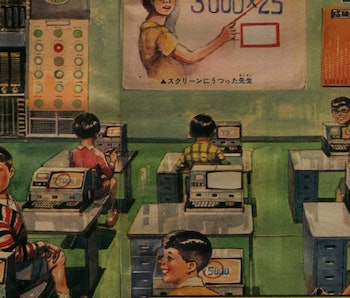 In “The Rise of the Computerized School” by futurist Shigeru Komatsuzaki, we find a group of (mostly) eager youngsters seated at desks equipped with personal touchscreen devices learning from an interactive digital math curriculum. At the head of the classroom, the teacher is beamed into the class on what seems to be a large flat-screen panel to give instruction. Noticeably absent are books and wires.

Back in 1969 Shōnen Sunday, a weekly magna magazine published Computopia, a series of illustrated essays foretelling the effect computers would have on life in the future. In three panels salvaged by Pink Tentacle, we see scenes reflecting computerized classroom, home, and even an operating room. For real, now, tell me this isn’t a dream that came true:

With the exception of little Johnny being beat about the head and face by those wicked looking pugil-stick-wielding robots, the computerized classroom scene predicts with startling accuracy the emergence of “smart” classrooms utilizing the power of wireless technology being implemented in schools all over the world. Textbook and Trapper-Keeper have being replaced by laptop and tablet, pen and paper with stylus and touchscreen.

Even in more traditional classrooms, school districts are supplementing and even replacing traditional curriculum with web-based learning systems like The Kahn Academy. Thankfully, teachers have still not been rendered obsolete, but even now the technology exists to have an instructor in a central location broadcast instruction to multiple classrooms all over the world in real-time.

And while the “computopia” education model is still mostly reserved for wealthier schools in wealthier countries, tech companies like Samsung have devised portable, solar-powered, smart classrooms complete with WiFi and satellite connectivity. With units operational in countries like Ghana, Botswana, and South Africa, these wireless, paperless classrooms are designed to bring hi-tech educations to rural students who previously had limited-to-zero access to a classroom of any sort.

The second still, The Amazing Unmanned Operating Room by artist Teruya Yamamoto, features a patient undergoing heart transplant surgery. We see his faulty heat on the table beside him, while a robot is preparing to insert an artificial heart In the background, we see the surgeon not with scalpel in hand, but directing the robot arm from a control panel.

It’s worth noting that while conceptually the artificial heart has existed since the late 1940’s, the first successful artificial heart device wasn’t implanted until 1982, a full 13 years after the Yamamoto published his illustration. Though artificial hearts have historically been used as sort of stop-gap measure until a donor heart can be located, surgeons in France successfully implanted the first permanent, self-regulating robot ticker in a human in 2013.

Oh, and that sinister looking robot surgeon? Sure enough, that’s a thing now too. The da Vinci Robot Surgery System was approved by the FDA in 2000. Invented to improve upon laparoscopic procedures (heart valve repairs, prostatectomies, and vasectomies, etc.) there are an estimated 200,000 slicey-dicey-octopus-armed robot aided surgeries per year around the world.

As of yet there is no Vascectomatic 5000 capable of performing the ol’ chop-chop-snip-snip-sew without direct input from your surgeon, but back in 2001 a surgeon successfully conducted remote gallbladder removal surgery on a patient in a French hospital, while sitting at a control panel in New York City.

Although Toshio Okazaki was a bit premature as far as timeline goes (this is meant to depict the year 1989), Computer Life in 20 Years is an extraordinarily on-the-money prognostication about your computer-infused home life. Let’s walk through this scene together and you tell me the accuracy here doesn’t blow your mind.

We have little Johnny home from school, recovering from his daily drubbing at the Detention Droids with a round of what appears to be some sort of 3D video game. Dad’s relaxing doing the Skype with one of his robot surgeon colleagues, while Mom seems to thoroughly amused by whatever is happening on her mobile device.

Okazaki even hits us with the robot vacuum cleaner, and the digital home entertainment center. Oh, and that domestic android doing the dishes? It might be on the shelves yet, but companies like Honda want you to know it won’t be too many more Black Fridays till you can snap up one of your own.

This is basically any middle-to-upper class American home right now sans the snazzy skinny-leg-business-casual onsie (and that might not be too far off either if Kanye stays in the fashion game). Obviously, in all of these panels, there hasn’t been an allowance for technology like the microprocessor that allows us to make such small, sleek devices. But, seriously, goddamn. What manner of Nostradamusp-ass sorcery were these cats into?

More like this
Entertainment
6.24.2022 11:15 AM
Behind the scenes at “Herogasm,” The Boys’ most NSFW episode ever
By Aaron Pruner and Jake Kleinman
Entertainment
6.23.2022 4:42 PM
Obi-Wan Kenobi Easter egg gives the show’s best scene a deeper meaning
By Dais Johnston
Entertainment
6.17.2022 11:00 AM
15 years ago, Marvel revealed its most ambitious crossover ever
By Richard Newby
Share: