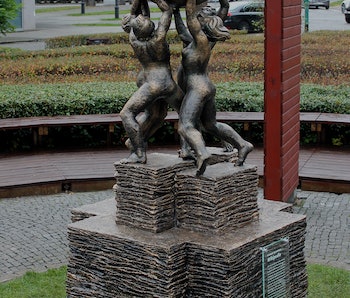 Oh, to have been there on that rainy October evening in Słubice, Poland, when they unveiled the world’s first-and-only monument in tribute to Wikipedia.

The crowd huddled under umbrellas and tents as dramatic music played. An official untied the ribbons and pulled back the silvery drapes to reveal four little bronze butts, clenched in their effort to help hold the weight of all the knowledge in the world.

This week marks the first anniversary of the $14,000 sculpture.

Happy birthday! May you ever shine in the sun.

Here’s the text of the inscription, according to (fittingly) Wikipedia:

“With this monument the citizens of Słubice would like to pay homage to thousands of anonymous editors all over the world, who have contributed voluntarily to the creation of Wikipedia, the greatest project co-created by people regardless of political, religious or cultural borders. In the year this monument is unveiled Wikipedia is available in more than 280 languages and contains about 30 million articles. The benefactors behind this monument feel certain that with Wikipedia as one of its pillars the knowledge society will be able to contribute to the sustainable development of our civilization, social justice and peace among nations.”

Who came up with this idea? Reportedly Polish professor Krzysztof Wojciechowski felt such deep gratitude for the contributions of Wikipedia and its editors to shared knowledge that he suggested the monument to the town administration.

“I’m ready to drop to my knees before Wikipedia; that’s why I thought of a monument where I could do it,” he told the press.