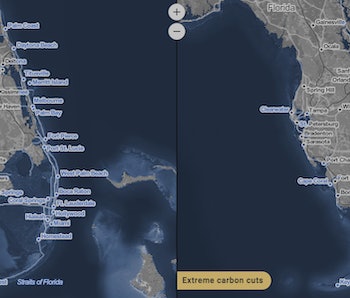 I’m sure you’ve seen them — the maps about what this or that part of the country will look like in the future thanks to climate change and sea level rise.

They’re scary, and they’re meant to be. Projections show that pretty much every coastal city is going to be in varying degrees of trouble as our warming planet sheds its glaciers and ice caps to the sea.

The most recent batch of dire predictions comes from a new paper published in the Proceedings of the National Academy of Sciences, and an accompanying interactive map by Climate Central.

Here’s what New Orleans will one day look like, according to the research.

The left panel shows the result if humans keep up their current fossil fuel burning habits through 2100. The right shows the result under the most ambitious carbon-cutting scenario envisioned by the Intergovernmental Panel on Climate Change.

Either way, it looks pretty bad.

The problem with these maps — if you ask me — is they don’t allow a lot of room for hope. Sure, the researchers suggest that we could save half of the homes to be swallowed with aggressive fossil fuel reductions, but it’s hard to look at these maps and think anything but, “we’re screwed.”

I can’t say I have much hopeful news to offer, but perhaps a bit of perspective.

When is this going to happen?

The researchers themselves have no clue. It could be in 200 years, it could be in 2000. What they looked at was the equilibrium level of sea level rise, given an amount of global warming. How long it will take to reach that equilibrium is less certain. Like an ice sculpture in a warm room, it’s easier to determine how much will melt than how quickly, according to Climate Central.

Are we all doomed?

The researchers calculate the number of people that will be left underwater in these scenarios, as if those people will be oblivious to the sea water slowly creeping up around their house. Of course, people will move and people will adapt. It’s already happening around the world. It will be expensive and painful, but with a horizon of 200 to 2,000 years, surely there is room to be hopeful.

But the lowest-lying cities are going to drown, right?

Maybe, probably. There is a lot of uncertainty in these models of what will happen in the future. The biggest uncertainty is what humans will do. Will renewable energy become so cheap that we will abandon our dirty carbon ways? Will a technology for carbon capture and storage on a large scale allow us to not only become a carbon-neutral planet, but actually reverse some of the damage that’s already been done?

It’s possible. And hope begins with the possible.