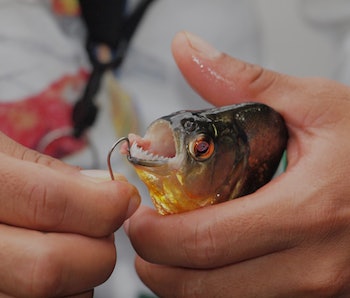 Like most mammals, humans are born with only two sets of teeth, and we end up losing most of them by age 60. Fish, in contrast, replace lost teeth throughout their adult lives. Could we ever share in the dental immortality of our piscine relatives? A team at the Georgia Institute of Technology and King’s College in London thinks so.

The researchers, publishing their work in the journal Proceedings of the National Academy of Sciences, discovered that teeth in fish begin as generic balls of cells in fish embryos. Depending on the activity of a few genes, these “developmentally plastic” — that is, flexible — cells eventually turned into either taste buds or teeth. Figuring out what those genes are and how to turn them on could hold the key to someday kickstarting the growth of new teeth in humans.

They pinpointed those genes by analyzing the genetic differences of over 300 Lake Malawi cichlids with varying numbers of teeth and taste buds. Drawing parallels between the active genes and number of teeth, the researchers were able to pinpoint parts of the genome that were active in more densely toothed fish.

With those genetic regions in mind, they raised fish embryos in a bath of chemicals meant to steer the cellular structures toward becoming taste buds instead of teeth. It became clear to them that there are specific genes — “developmental switches” — that determine the fate of these cells. If they can figure out how to coax development in the other direction, the same could someday be done in humans.

But before they do that, they need to find out how closely those fish genes run parallel to those in mammals. For the researchers, discovering the corresponding genetic regions in mice was a good start.

“The more we understand the basic biology of natural processes, the more we can utilize this for developing the next generation of clinical therapeutics: in this case how to generate biological replacement teeth,” says the study’s co-author Paul Sharpe.