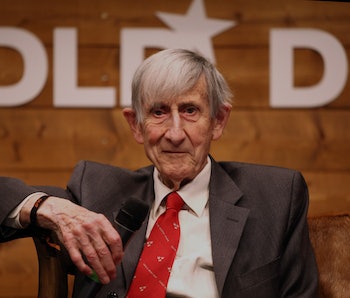 Brilliant physicist and committed (gasp) Democrat Freeman Dyson has called out President Obama on his climate change stance and Fox News et al. are busy making low-quality hay. The deniers are desperate. The best hero they can muster is a 91-year-old guy who’s the first to admit he’s no expert and has no interest in being the spokesperson for this cause.

“I guess one thing I don’t want to do is to spend all my time arguing this business,” Dyson told Yale Environment 360 in 2009, after the New York Times Magazine published a cover story that focused on his skepticism. “I mean, I am not the person to do that. I have two great disadvantages. First of all, I am 85 years old. Obviously, I’m an old fuddy-duddy. So, I have no credibility. And, secondly, I am not an expert, and that’s not going to change. I am not going to make myself an expert.”

Dyson, who is indeed a very smart person, puts forward some valid criticisms of climate science: Climate models have a lot of uncertainty; scientists are biased towards thinking that their field of study is more significant than it really is. His broader point may be that scientific consensus shouldn’t require the intentional silencing of skeptical voices. It’s a point well taken.

“My objections to the global warming propaganda are not so much over the technical facts, about which I do not know much, but it’s rather against the way those people behave and the kind of intolerance to criticism that a lot of them have.”

But as a self-professed non-expert, he is also woefully misinformed. Let’s listen to some more of what he told Yale Environment 360, shall we?

“No doubt that warming is happening. I don’t think it is correct to say “global,” but certainly warming is happening. I have been to Greenland a year ago and saw it for myself. And that’s where the warming is most extreme. And it’s spectacular, no doubt about it. And glaciers are shrinking and so on. But, there are all sorts of things that are not said, which decreases my feeling of alarm. First of all, the people in Greenland love it. They tell you it’s made their lives a lot easier. They hope it continues. I am not saying none of these consequences are happening. I am just questioning whether they are harmful.”

“And the most serious of almost all the problems is the rising sea level. But there again, we have no evidence that this is due to climate change. A good deal of evidence says it’s not. I mean, we know that that’s been going on for 12,000 years, and there’s very doubtful arguments as to what’s been happening in the last 50 years and (whether) human activities have been important. It’s not clear whether it’s been accelerating or not. But certainly, most of it is not due to human activities.”

I’m not going to take down Dyson point by point, but suffice it to say that the evidence that climate change is caused by humans and that the consequences are going to be really bad is overwhelming.

No, climate models aren’t perfect, but they’ve been proven out by decades of real-world evidence and they do a pretty good job. Scientists need to be open to criticism, and they are — at least from within their ranks — that’s what the entire scientific process is built around. A healthy discussion requires that neither side be disingenuous. Dyson isn’t, but those that would have him take up a banner might be. This is presumably why Dyson isn’t exactly leading a phalanx of skeptics into battle.

“It is definitely a tactical mistake to use somebody like me for that job, because I am so easily shot down. I’d much rather the job would be done by somebody who is young and a real expert. But unfortunately, those people don’t come forward.”

“I have a lot of friends who think the same way I do. But I am sorry to say that most of them are old, and most of them are not experts. My views are very widely shared. Anyway, the ideal protagonist I am still looking for. So the answer to your question is, I will do the job if nobody else shows up, but I regard it as a duty rather than as a pleasure.”

Dyson seems like a cool guy even if his takes are a bit hotter than they ought to be.