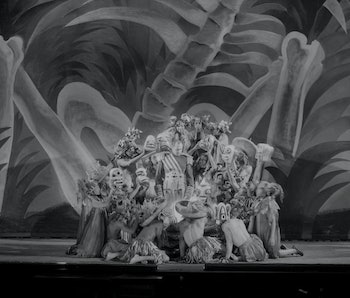 What if I told you that, as a part of a federal stimulus package, the federal government once wrote a 20-year-old director a check to stage Macbeth to fight Jim Crow? Don’t worry — it gets weirder. This young director set his version of the Shakespeare masterpiece in Haiti, and based it loosely on the life of a former slave-turned-revolutionary-turned-king named Henry Christophe, and cast only black performers. The year was 1936, the director was Orson Welles, and the New Deal was fly as hell, y’all.

Founded in 1935 as a part of the Emergency Relief Appropriation Act of 1935, the Works Progress Administration was an arm of the New Deal with one task: put millions of unemployed Americans back to work. While the WPA was more expensive than issuing direct relief payments to the unemployed, it created a whopping 8 million jobs, and chances are you still enjoy the fruits of government-funded projects today: many of the roads, bridges, libraries, schools, parks, airports, and even stadiums we access today were all built during the WPA’s eight-year existence.

One of the WPA’s lesser-known initiatives was Federal Project Number One, which sought to employ artists, musicians, artists, and actors. Even New Deal supporters of the day questioned the wisdom of spending taxpayers’ money to commission murals, paintings, music festivals, and theatrical productions on such a large scale: some $27 million of the $4.88 billion allotted by the Emergency Relief Appropriation Act were funneled to Federal Project Number One. However, for WPA director Harry Hopkins, creating work for artists was a no-brainer: “Hell! They’ve got to eat just like other people.”

Hopkins created the Federal Theater Project (along with divisions for music, art, and writing) in 1935, naming producer, playwright, and Vassar College theater professor Hallie Flanagan to head it. Under Flanagan’s incredibly progressive direction, the project sought not only to create jobs, but to provide a diverse array of theater groups across the country the funding and platforms to produce work that reflected their communities. Most importantly, Flanagan unabashedly sought to use those works as a way to combat racism, sexism, and poverty.

While failing health severely limited her participation in the Macbeth production, famed African-American actress, director, and producer Rose McClendon was chosen by Flanagan to head the new Negro Theater Unit. Under its banner she founded groups in cities like Seattle, Birmingham, Chicago, Los Angeles, and of course, her hometown — Harlem. McClendon selected experienced producer John Houseman as co-director of the Harlem unit, and under his advisement, hired a then-unknown Orson Welles to turn his vision of a Haitian-themed Macbeth interpretation into reality.

Even before its debut, the play faced rebuke. New Deal opponents had already declared that the Federal Theater Project was a waste of tax dollars, yet another in the long line of Roosevelt’s excessing spending programs. Seeing federal money going to produce such “radical” works, Percy Hammond of the Herald Tribune called the Negro Theater an “exhibition of deluxe boondoggling.” FTP productions like Welles’ Macbeth were so controversial, in fact, that Hallie Flanagan was eventually called to testify before the House Un-American Activities Committee, accused of using the Federal Theater Project as a front to spread communist and socialist propaganda.

Once the play went up, self-appointed purists decried the all-black production as a mockery of Shakespeare and the institution of the theater itself. African-American actors were fine as entertainers, but were certainly not meant perform the classics. It “wasn’t Shakespeare at all,” wailed one critic, but rather “an experiment in Afro-American showmanship.” The acting was panned as being performed with “childlike austerity” while other critics commented on the lack of “poetic delivery” and “vocal passion.”

Many African-Americans were upset that Welles, a white director, was chosen to lead an otherwise all-Black production. The play coincided with the height of the Harlem Renaissance: writers, poets, and playwrights like Langston Hughes, Zora Neale Hurston, Jean Toomer, and Claude McKay were producing some of their best work (Hughes’ The Mulatto had just opened in Harlem to rave reviews). Most of the building blocks for the Negro Theater Unit were already in place due to McClendon founding The Negro People’s Theater a year earlier. There was already a wealth of experience and talent in the African-American community, especially in Harlem, but a significant lack of funding and opportunity. Why hand the reins of such a well-funded, potentially ground-breaking project to a white guy from the Midwest?

There was further fear that Welles’ vision was merely an attempt to lampoon black people in the eyes of white audiences; that a “voodoo-themed” Macbeth was simply Shakespeare in minstrel form. Locals heard rumors about Welles replacing the three witches with voodoo priestesses, the search for authentic witch doctors, and set designers frantically working on “jungle” scenery. New Yorkers became suspicious. The tension was so high, the police patrolled the theater around the clock in the days leading up to the premiere.

If the Negro Theater Unit was serious about showcasing Black talent, why not produce Shakespeare in its traditional form? Black thespians, most notably Paul Robeson — who wowed audiences in England with his portrayal of Othello — found success in Europe and Canada, but were in effect banned from performing Shakespeare in the United States. Many argued that a “blackened” or “voodoo” version of Macbeth was a concession that black actors and actresses really couldn’t pass muster performing traditional white theatrical roles.

Houseman, who had already produced a Gertrude Stein opera with a predominately black cast, justified the Caribbean interpretation, reasoning that Harlem audiences would not be interested in watching dramas written from white points of view (though, interestingly, he couldn’t understand why a black point-of-view written by a white author would be a problem). At the same time, he understood black audiences were growing weary of the pigeon-holing of black performances to revues and light song-and dance numbers.

Welles, ever the self-promoter, felt that a traditional Shakespeare production wouldn’t make it out of Harlem. He wanted the controversy; he shrewdly understood that the spectacle of his Macbeth production would not only launch the play into the national conversation, but also the director himself.

And spectacle it was. With a cast of more than 750 actors, musicians, and extras, the Harlem Negro Theater Unit’s premiere performance on April 14th, 1936 defied any and all expectation. Critical reviews and suspicions be damned, the play was a hit with audiences, black and white alike.

An integrated crowd of more than 10,000 people gathered to attend the opening at Harlem’s historic Lafayette Theater. When the play ended, it was reported that there was a 15-minute standing ovation. This is important, because at that time, even in northern cities like New York, most venues were still heavily segregated. Even George Gershwin’s legendary production of Porgy and Bess, which debuted a year earlier, was performed in front of all-white audiences. After the 10-week run at the Lafayette, and another shorter run in Manhattan, the troupe toured to cities like Seattle, Chicago, Cleveland, Los Angeles, and Boston, performing Macbeth to sold-out, integrated crowds across the country.

As impressive as the production was, the political statement was more poignant. In the words of journalist and Peabody-award winning author Roi Ottley:

“From the point of view of the Community, Harlem witnessed a production in which the Negro was not lampooned or made the brunt of laughter. We attended the Macbeth showing, happy in the thought we wouldn’t again be reminded, with all its vicious implications, that we were niggers.”

Sadly, the most enduring legacy of the mostly forgotten performance, and the Federal Theater Project as a whole, is of being the launching pad for Orson Welles’ meteoric career. That certainly isn’t a knock on Welles, who left the FTP for Hollywood in 1938, and went on to make arguably the best film of all time in Citizen Kane. Rather, it’s a shame that such an amazing cultural moment, especially one that echoes the issues facing the nation today, exists only in history’s periphery.

In our current political climate of budget cuts, polarization, and austerity — where Congress refused to pull together the funds to prevent Sesame Street from being privatized — the thought of federally funded art projects on that scale, especially those designed in part to highlight social injustice, would send half of the country into apoplectic fits. However, the story of Welles’ Macbeth did exactly what it was supposed to do: As it employed people to create socially conscious art, it reverberated across the entire nation, changing — at least in some small part — how people saw their world.

Socially and culturally, we’re still trying to answer many of the same questions that beset Flanagan and Co. some 70 years ago. Who gets to play what role, and why? Who gets to tell whose story and who decides who gets to tell it? Is diversity in Hollywood still an issue because of lack of talent or lack of opportunity? Perhaps these questions will never properly be answered, but we should certainly be able to look back at the Harlem Negro Theater Unit as both a celebration of past success and a building block for a future that listens to its long memory.

To think that way back in 1935, a bureau of the United States government — under the direction of two women (Flanagan and McClendon) no less — could put together a federally funded theater group designed to put unemployed artists back to work while attacking Jim Crow-era segregation is awesome in the truest sense of the word. To see that seven decades later it’s all but forgotten? That is a tragedy of Shakespearean scale.

More like this
Entertainment
Sep. 26, 2022
Christian Bale reveals the secrets of his “weird” transformation in Amsterdam
By Jake Kleinman
Entertainment
Sep. 27, 2022
New Star Wars comic changes the origins of a famous Sith tradition
By Dais Johnston
Gaming
8 hours ago
How Minecraft is building a more empathetic metaverse in the classroom
By Jen Glennon
Related Tags
Share: