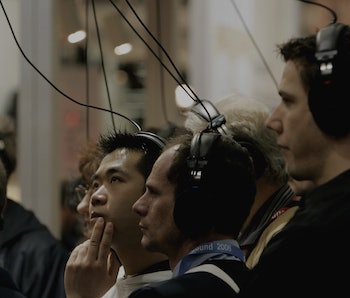 It’s fall now, embrace the layers, embrace warm alcohols and listen to some of these podcasts below.

SIMMONS V FRANCESCA I. Jk it was a really good discussion from arguably two of the biggest personalities in the sports media game — assembling a “Sports Media Mt. Rushmore” would be a real Simmons-y thing to do by the way — and it was cool to see them shed some light on some of the backend talks they had over the years. Also, in a rare moment of propping up a journalist on talk radio, Francesa’s praise of Grantland writer Katie Baker was heartwarming as hell. Francesca calling Simmons and saying essentially, “How much money do you make? This is Francesa,” is a meme I will devote my life to making. - Corban Goble

The Reply-All podcast often looks at the weirder, lighter side of internet culture, but episode #41, uploaded on October 7, profiles Jamie Keiles, a young writer who while in college, found herself uploading photos to her Instagram account that documented her depression and often lacked other people or color. Without any sort of polish that sometimes comes rubbed all over tough memories, Keiles recalls her thoughts of suicide and how her friends didn’t know how to help her; urging her to just write more as a way to snap out of it. With host PJ Vogt, she scrolls through what she calls her “depression grams,” photos she took of herself — “cheerless selfies” — while depressed, and goes over how many likes they got or her comments on them and how that affected her. Keiles is very funny and brings and brings some warmth to this serious issue. Vogt also remembers his own depression — a surprisingly hard thing to do once you overcome it. - Nick Lucchesi

This week the New York Times Popcast decided to dive deeper into the world of Justin Bieber. This week focuses on his song writing guru Poo Bear. The Times got to spend time with the song writer and track his days in Atlanta boy bands and writing the number one song in the country. Though there is a lot of Bieber commentary in addition to Poo Bear back story, one of the great little facts was that Poo Bear was one of the writers for “Bump, Bump, Bump”. And I want to leave y’all with that in mind… - David Turner

More like this
Culture
8.13.2022 11:30 AM
25 years ago, the worst sci-fi TV pilot ever launched a pop culture phenomenon
By Jon O'Brien
Entertainment
11 hours ago
Star Wars theory reveals a dark truth about Obi-Wan Kenobi
By Dais Johnston
Entertainment
10 hours ago
6 Game of Thrones episodes you must rewatch before House of the Dragon
By Alex Welch
Share: