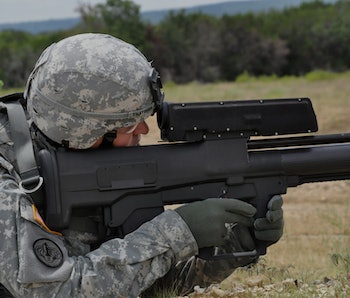 Getting shot — and war in general — is awful, which is why the people who end up on a battlefield invariably spend a good deal of time hunkered down in trenches or behind rocks or trees or other ballistic-stopping objects. Taking cover is born out of the human instinct for survival, and has been regarded as a fantastic idea since the standing in rows shooting at colonists lost its luster in Concord. But a new death-dealing machine, called the XM-25 Counter-Defilade Target Engagement System, or less clunkily, the Punisher, wants to solve the cover scenario by dropping a grenade through it.

The XM-25 is a programmable grenade launcher that fires 25 mm explosive rounds. A laser finder on the top gives the soldier the range to the cover sheltering the enemy combatant, and the shooter can tweak the distance at which the fired grenade will explode. This means, according to Orbital ATK, its manufacturer, a “300 percent to 500 percent increase in hit probability to defeat point,” which is a pretty grim euphemism for “more killshots.”

The gun has been field tested since 2010 in Afghanistan, where the weapon earned its Punisher moniker; early live-fire demos received positive feedback. A malfunction in 2013 delayed widespread production, but should it meet the Army’s standards Orbital ATK expects more soldiers to bear the arm by 2017.