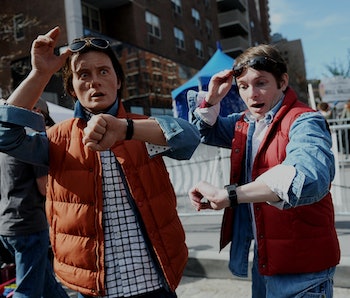 Halloween is nigh, and as it happens, Back to the Future Day is on October 21. The time travel comedy has staked its claim as a classic via its multi-generational storyline and iconic characters. Hear the name Christopher Lloyd, and it’s a good bet that you’ll think of his shock of white hair as the manic Doc Brown from director Robert Zemeckis’s trilogy of films. Think of Michael J. Fox, and you’re guaranteed to think of the charming do-good slacker Marty McFly. A much simpler Halloween costume, you’ll surely agree.

Because we’re also slackers, we’re only highlighting Marty’s looks in the original and Part II. While Part III is still a misunderstood gem as a whole, all you would need to do for Marty’s costume in the Old West is just get a poncho, a cowboy hat, and a pistol. Giddyap, Clint Eastwood.

Back to the Future

Marty’s red down vest — not a life preserver — is a pretty standard find at any outdoor shop. You could even probably scrounge one up at a Goodwill or a thrift store somewhere. But if you want to go all out and still be able to wear it after Halloween, or while cosplaying Marty at a later date, you can’t go wrong with this one from the ultimate dad shop, Land’s End.

There is a small cult online surrounding Marty’s iconic jean jacket, first made by clothing company Guess for the original movie. Though that specific design was never offered for sale, plenty of fanboys and — girls— out there have taken it upon themselves to create replicas, and other similar designs can be found on eBay. But that’s kind of cheating. Instead, this jean jacket from Wrangler is a fine substitute.

It’s surprisingly difficult to find an exact match for the white and black checkered shirt Marty sports in the first movie, so this is one that you’ll have to be on the lookout for well in advance of your costume date. This shirt from the always reliable Bonobos is another one you can reconfigure into your normal wardrobe after going back in time as Marty.

Quite possibly the easiest component of any Marty McFly costume, you can find this one anywhere. Why not take advantage of those impending American Apparel bankruptcy sales and snag a cheap red tee?

Ditto on the suspenders. You can pretty much do whatever you want for the most ska-tinged detail of his wardrobe. These Dickies suspenders from Amazon look right. In the ‘80s you didn’t need a belt, and you don’t need one in the future of 2015 either.

Marty liked to match the denim on top with denim on the bottom. Chances are you already own a beat-up pair of Levi’s or comparable blue jeans, but to get the right ‘80s wash look, why not try these from Levi’s themselves.

Get nerdy while calculating the 1.21 gigawatts it takes to power the flux capacitor with this Casio calculator watch.

Back to the Future Part II

Same as above, just make sure you turn your pants pockets inside out since that’s what all teenagers do in the future.

This is another tricky one since, again, you could just go with the officially licensed replica. But that’s no fun, and it can’t actually dry itself. Instead, you could get crazy and buy this nearly self-drying jacket called the “Fly Terra Trek 4.” It sure sounds futuristic — and echoes the character’s name, to boot — while the website selling it promises an “Air Induction System [that] allows for maximum venting featuring straps that force the chest vents open allowing for maximum air intake venting,” while “large zippered intake vents are located on the shoulders” so “hot air is exhausted through large vents located on the back.” Sure, it’s way too expensive for a one-off costume, and is basically meant to wear while riding a motorcycle, but who cares.

A Back to the Future Part II costume wouldn’t be a BttF Part II costume without a hoverboard. Same deal here: The officially licensed one is available for nearly $50, but you’d probably only get one use out of it, then put it in the corner and just kind of reference it in a joking way after that. Instead, why not break into the Lexus R&D building — wherever that is — and get a little five-finger discount on an actual working hoverboard prototype? The sad part is the only way to shred on thin air is to buy a ticket to Barcelona and make your way to their custom “Hoverpark.” Still, it’d show you’re committed.

Besides the hoverboard, no other item from Back to the Future Part II has captured the geeky minds of superfans than Marty’s self-lacing Nike sneakers. Nike actually released a limited amount of replica versions of the MAG in 2011 to raise money for Michael J. Fox’s Parkinson’s Disease research foundation. You can now find versions of those going for upwards of $9,000. But Nike will reissue the sneakers with an actual self-lacing mechanism — well, self-tightening mechanism — available on November 28 of this year. In the meantime, just snag a pair of the officially licensed replicas.